Even former weatherman and Australia Day ambassador, Mike Bailey couldn’t predict the weather events for Australia Day in Bingara. The threat of rain saw the Australia Day ceremony move into the Civic Centre but as the morning preceded the sky opened up, the clouds disappeared and the blue sky could be seen in true Australian form.

With the afternoon came dark storm clouds, which threatened to ruin the Sporting Club’s events but just as the players thought they would have to run for cover, the clouds dispersed and the day continued as normal.  Despite the constant changing weather pattern, the community wasn’t deterred from the Australia Day celebrations. 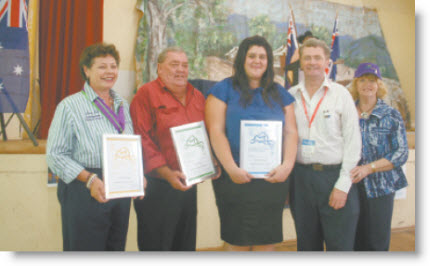 Perhaps the smell of bacon cooking is what drew the crowd to the morning ceremony, a breakfast of bacon and egg sandwiches provided at just a small price by the Lions Club. The fresh eggs kindly donated by egg producer Bede Burke, were delicious and fresh and the breakfast was very successful.

Jamie Wilson entertained the crowd with his guitar playing and singing, dressed in the appropriate Aussie attire of shorts, singlet and thongs.

This years MC, Linda McDouall opened the proceedings with her own comments on the meaning of Australia Day. “This is our way to celebrate what is great,” she said.

Bingara Central School Captain, Nicole Coombes and Vice Captain, Daniel Rafter brought the Australian Flag to the front of the stage.When asked what was so good about Australia, Nicole replied “I love how we can travel around the continent without needing a passport, I love the beautiful surroundings like the Opera House, Uluru and the Sydney Harbour Bridge.”

Australia Day Ambassador Mike Bailey was soon welcomed to the stage. “Its nice
to be back,” he said.  Due to wife Helena, Mike spoke of his family connection to the area and of his knowledge of the harsh inland weather. He spoke of the significance of Australia day particularly since the Bicentennial of Captain Cook in 1998.

“It showed the importance of Australia,” he said.  “In so many different ways we have come from different parts of the world.  For many of us we have just accepted the great gift of being part of this nation.”

Mike went on to speak of his role in the Climate Change Project and the important role the Emergency services play. “They play an enormously massive role, he said.“We honour so many Australians but it is the grass root people who really keep things going. The people who give their time working
behind the scenes to make things happen.

“It is people like our locals that really keep Australia going.  He urged the crowd when reading the list of Australian’s recognized for their contribution to the nation, to always read the bottom of the list. “These are the grass root Australians who have made a great connection to the nation,” he said. “It’s a pleasure to be among you and a pleasure to salute you here today”.

The Australia Day Bingara Citizen of the Year went to Graham Whitton. “Graham has been an outstanding volunteer for the Bingara Community for
13 years including his involvement in HACC, Meals on Wheels, Supporter of local sport and follows his grandsons sport,” she said.

“His contribution enables services to operate that would other be very limited. He makes himself available to transport locally and inter town and can often be on the road four to five days a week.

“Graham consistently volunteers five days a week, always with a smile and he seeks no reward of publicity for his efforts,” concluded Catherine.

Graham a man of few words was obviously very pleased with his award.“I am very thrilled to receive this award,” he said.  “I love doing this and I’ll continue to do this while I can.”

Kimberly Apthorpe was in tears of shock and appreciation after been awarded Young Citizen of the Year. “Kimberly volunteers a lot of her time,” said Catherine. “She particularly encourages the development and involvement of young members of the shire.

“Kimberly is energetic and enthusiastic and a great positive role model for the youth of the shire. “She brings out the best in people and has become a draw card for the local community”.

This years Community Event of the year went to the Gwydir River Rats. “The Rats were formed in 2011 starting a year of great sport, sportsmanship, growth and community interest,” Catherine said.

“They were the firs tRugby Union team in Bingara since 1968.  A very unique team as ages ranged from 17 to 50 something. “They were a mix of farmers, tradesmen, teachers, first time union players and more experience players.

“Their homes games supported and promoted the community businesses and sponsors in a very positive way. The entire community embraced the team as their talents improved. They showed great commitment and dedication to establish a new sport in Bingara, learn the rules and achieve great results in their first year.

They are an extraordinary example of team work, dedication and pride,” she ended.

Mike Bailey presented the awards and also made a special presentation to two members of the SES. “There’s been a lot of publicity recently about people volunteering to help their communities and their country, Peter O’Brien and Alf King are two such people.

“Peter O’Brien joined the State Emergency Service in November 1985 and is now the local controller for SES in Gwydir Shire and responsible for Bingara and Warialda SES Units, he has assisted in many emergences over that period both within our Shire and abroad.

“Peter is a recognized trainer in many fields and services on the Vertical Rescue committee. Today he is being awarded the 25 year long service Award,” Mr Bailey said.

“Alf King joined in May 2000. He has become a well-recognized Trainer with SES and is amongst the first to put up his hand for storm and other emergencies here in Bingara and anywhere else he may be asked to go. As most locals know Alf has many more years up his sleeve and as a volunteer, with Radiance, RFS and Touriandi to name a few. Today Alf receives his 10 year long service medal from the State Emergency Service.’

Catherine and Linda concluded the official proceedings by presenting Mr Bailey with an Australia Day Ambassador Pin and box of Bingara souvenirs. Jamie Wilson then entertained the crowd further with some well-known Australian songs.