Members for Northern Tablelands, Adam Marshall and Member for Parkes, Mark Coulton both enjoyed a spectacular evening at the Roxy Theatre last Friday, for the Orange Festival Charity Queen and Princess ball.

Five young ladies, including Danika Fields, Tash Cooper, Jade Butler, Ally Dixon and Hannah Perrin were the stars of the show after spending months raising money for their local charities.

After much deliberation between judges prior to the ball the winners were announced. Mr Marshall presented the three worthy recipients with their crowns and sashes. 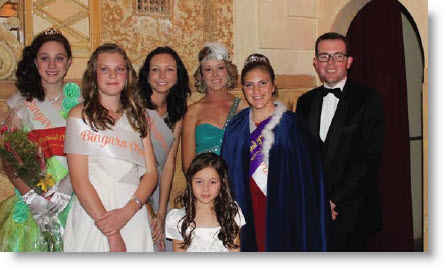 “They have worked tirelessley of the past few months and I am excited to announce they were able to raise a total of $8162.45 with 100% donated to their chosen charities.”

Orange Festival Queen, Ally Dixon was very grateful to the community for all the support she received for her fund raising events.

“ I did not enter this competition for any other reason then to give back to my community and I would like to thank all those who supported me in doing so.”

The National Australian Navy Band provided the evenings entertainment which was well received by all and had the majority of the crowd attending up and dancing all night.