At the recent Lions 201N1 District Cabinet Meeting in Armidale, local Lion Steve Adams was presented with a William R Tresise Fellow Award. He received the Fellowship Award from the Australian Lions Foundation which is the highest honour the Foundation bestows for humanitarian services. There is no restriction on the donor as to who they can recognise. 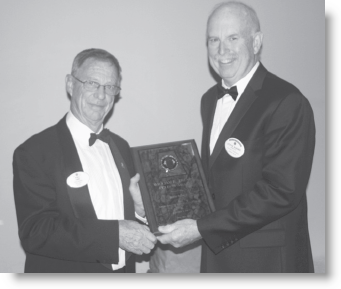 Many Clubs, Zones, Districts and other Lions Groups recognise a member or members for such things as, years of service or because the member has completed a project of some consequence or has been a very active member of the club or organization or community.

Some Clubs each year recognise others in their community for their outstanding contribution. eg, Mayor or Shire President, SES groups, CWA members, Meals on Wheels helpers, Voluntary Ambulance and Fire Fighting members, Youth Leaders, etc. These are just a few examples.

This award, named after the Founder of Lions in Australia, was presented to Steve, when the 201N1 District made an undesignated gift of $2,000.00 to the Australian Lions Foundation in honour of him.

Steve has been working with Cabinet for two years and is about to embark on his third term. In his firstyear on Cabinet Steve was Chairman for the Youth Ex-change program which involved promoting and placing International Exchange students with Lions families throughout the District. His hard work and dedication was rewarded with the highly regarded Harry Hession Bronze Honour award (2010) in appreciation for outstanding Lions service. Last year Steve was given a new portfolio as the District Leo Club Chairman for the Inland Regions.

During 2010/11 he has been heavily involved with the formation of two new schools based Alpha Leo Clubs in Ashford and Quirindi. He is also working with another two Lions clubs to implement Leo Club programs and working on initiating another four. His work carries him to all parts of the region to promote and encourage schools, students, older youth and Lions clubs in general to look at and support the Leo Club concept.

The local Bingara Lions Club meets 7pm every firstand third Tuesday of the month at the Bingara RSC.