BingaraLatest NewsGeneralLocal man takes the reins at the Imperial Hotel

Local man takes the reins at the Imperial Hotel

Jason Coss, who grew up in Bingara before moving away to pursue a career in hospitality, has taken on the lease of the Imperial Hotel.  For the past eight or nine months, Jason has worked for the hotel’s owners, Erik and Noelene Ozols, and takes over on Tuesday, April 3. 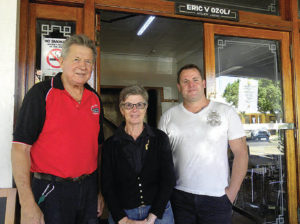 Erik and Noelene Ozols with new publican, Jason Coss, who takes over on Tuesday.

Jason grew up in Bingara and attended Bingara Central and Warialda High Schools. Jason said he “was too busy making money to sit for his HSC exam”, having been working in after school and school holiday jobs since the age of 14.  He worked in various jobs, pumping petrol, and lumping fertiliser for a stock and station agent, but most of his jobs were in hospitality.

After he left school, Jason worked at the Country Comfort Motel in Tamworth, as a kitchen hand and breakfast cook.  “When I was 18, I worked for a while at the Imperial Hotel, which was then owned by Terry and Elaine Watson, and for Erik and Noelene when they first bought the hotel,” Jason said.

After his stint in Tamworth, Jason headed for Sydney, where he worked for a catering company at the College of fine Arts. He also got a job at the Coogee Bay Hotel. Because he was working 70 or 80 hours a week, he quit the catering company job.

After a two-year stint with a catering company in the mines in Western Australia Jason returned to the NSW north coast, working at Kingscliff then at Byron Bay.  “It was an eclectic group back here,” Jason said.

He hopes to use the contacts he made with musicians at Byron to provide live entertainment during the summer months.  “The pub is a good business, providing coffee and food, and I would like to use the outdoor area at the back more, to make it more family friendly so kids can play,” Jason said.  “During the winter, we will operate as is, with the fires burning.”

“I would like to thank Erik and Noelene for their quarter of a century of service to the town. It is the end of an era.”

Erik and Noelene moved to Bingara in January 1994, with their two daughters Beth and Fiona. The family became involved in a range of community activities, including Brownies, Junior Tennis, the Central School P&C, Swimming Club, Westpac Rescue Helicopter and Pony Club. Many other local organisations have received support from the Ozols family.

In recent years, Erik has found time to realise his ambition, stated in the Bingara Advocate in 1994, to play golf.

In 2008, they were jointly awarded Bingara’s Citizens of the year.

Noelene said she and Erik are looking forward to having a rest, and to travel.  “We’ll still be around,” Erik said.

Beth and her husband, Dean Brown, have bought a property at Delungra, and Erik says he will be the labourer on some renovating projects.