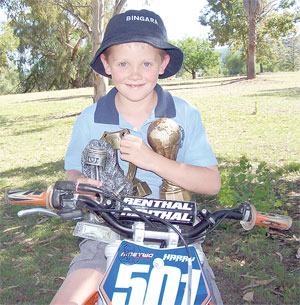 The series was held in three heats, at Inverell, Narrabri and Moree, the last of which was held on October 21. Harry went into the last heat leading his division, and clinched the series with another win. He and his brother Jack started riding competitively only last year, and while Jack prefers football, Harry has found his niche in motocross.

He told the Advocate he likes the sport because “I get to race against people, make friends and have fun. “Winning is great too, it makes you feel good.”

Harry began riding at a very early age, “as a 2 year old in nappies”, according to his father, Jason.

Next year, Harry will compete in the Shell series in Queensland. This competition is bigger and faster. Harry will also graduate to a 65cc bike, but is not quite ready to give the 50cc away yet. Next year, he will be racing two bikes.

Although he is competing against boys who have practise tracks, Harry is unfazed that he does not get to practise for events. “I just do it”, he said.