Local student to perform in Italy 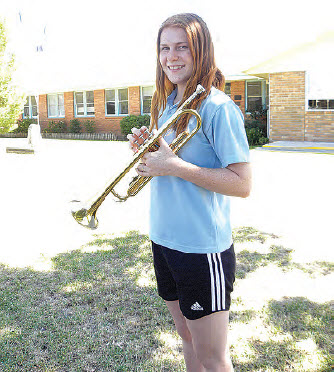 Bingara Central School student, Sarah Heaton, has been selected to travel to Italy in January with the West of the Divide Wind Band and Choir.

The Year 9 student who plays the trumpet also performed at the Sydney Opera House in early September.

Mrs Robyn Conway will also be touring as part of the staff who will accompany the students. The tour will include concert performances, master classes and school exchanges in Rome, Venice, Florence, Zagreb, Lake Bled and Postojna.

Sarah has been playing the trumpet for seven years. Her first choice was the trombone, but the school needed someone to play trumpet.  “I can’t see myself playing that now,” she said.

To be selected in the band, Sarah had to attend three band camps and three band link, where people come together to play as a group.  From there she was selected to play in the state band.

Sarah said she was very excited about the trip, and pleased that her grandparents will tour with the band.