Local to star in Australian classic

A Bingara local has set off to find fame and fortune on the silver screen.  It is the stuff dreams are made of – a producer comes along and searches for the face and charisma of a star, finds it among the masses and the unsuspecting one flings from obscurity to the big time.

So it has been for ‘Cosmo’ the mule. The eight year old has left the familiarity of John Wade’s paddock for the bright lights to pursue his acting career.  He won’t be starting out at the bottom either. Cosmo has been selected to feature in a remake of the Australian classic, “Gallipoli.”

According to John Wade’s assistant and neighbour Sharon Rafter, he was perfect for the plum role.  “Cosmo was spotted by a producers agent who finds livestock for film and he fit the bill perfectly,” Sharon said. 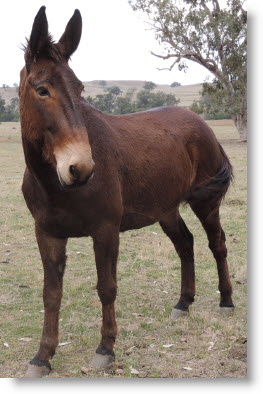 “He’s a natural. We have been sent photos and he is doing really well. He had already been broken in and ridden for stock work so he was ready to go. He has got so much personality and the longest ears. He’s a bit of a rabbit really!”

This could be the start of great things for Cosmo, who left for South Australia a couple of months ago.  “He could go on to do other movies, but he won’t be coming back,” Sharon said.

“He is so cheeky, and a bit of a show-off. Definitely a lover, not a fighter. But it is a great thing for him. He is paid in as much hay as he wants. He was only grazing around the paddock so who knows. Perhaps he’ll make it to the Logies or even the Oscars!”

Cosmo will be part of a televised series of Gallipoli, set to go to air next year.