Local tradesmen, builder Andrew Hart, Ron Johnson of Johnson’s North West Carpet Service and electrician Michael Hayes, and other tradesmen from outside the immediate area have almost finished renovations to the Bingara IGA and hardware building.

Included in the renovations is the re-positioning of the office and new checkouts positioned to improve traffic flow through the checkouts.  As a result, the supermarket area will be bigger, and easier to negotiate.

“We need to compete with larger supermarkets, and keep our supermarket lively and fresh,” Bingara IGA owner, John Bishton said. 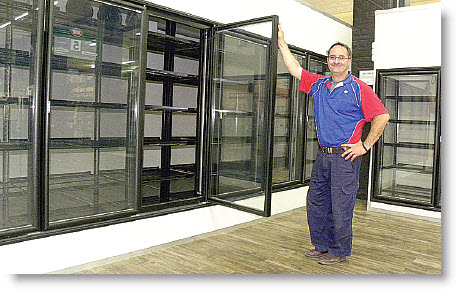 The biggest change is in the liquor department. The 120 square metre area means a better display area and will allow an increase in the range of stock. A new 14 door Australian made, coolroom has been installed.

At the moment, Bingara IGA receives two deliveries of fresh fruit and vegetables per week from Brisbane.

“We also top up if we need to, from Sydney,” Mr. Bishton said.

Last year, Mr. Bishton said, they did sell some local produce, and plans to expand on this.

“We plan to meet with local growers very soon,” he said. “We will ask for a commitment on supply and price so both we and the growers know what is expected.”

In their quest to be ‘the greenest IGA in NSW’, the Bishtons have also just had over 160 solar panels installed on the supermarket roof.

They expect to save at least $18,000 off their annual power bill, which is currently around $80,000. The solar power is strong enough to feed the three phase power, and provide electricity to the whole shop throughout the day, with the grid only being drawn on at night.

With expected savings of electricity, buying local produce and Bingara IGA’s existing policy of no plastic singlet bags, John and Karen Bishton may well achieve their aim of being the greenest IGA owners in NSW, or even Australia.