The final will be held in Moree on Sunday April 15 with over $1000 in prizes available.
Tahlia performed the Taylor Swift song, “Breathe” while Maddy sang her own composition, “Stay the Same”. 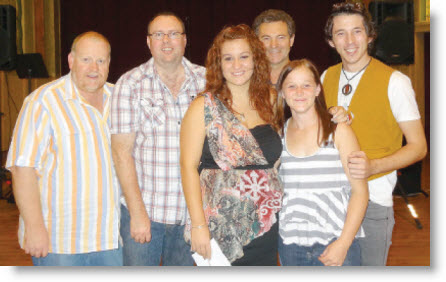 Pictured are Maddison Rose, on the left, and Tahlia Stevens, with the judges, Marty, Matt, Rick Hutton and Aaron Dennis.

Both performers accompanied themselves on guitar. A small audience of family and friends were delighted by the talent of the two.

Judge, Rick Hutton said, “These two entertainers show both skill and Paddock confidence in their performances. I am double delighted by their success because they have both been cast as soloists in our community musical Big River Dreaming, which will be staged at the Roxy in August.”

The competition’s coordinator Esther Chapman, Projects Officer from Moree Plains Shire Council, brought with her an enthusiastic troupe of young people to set up and run the session.

Esther thanked the Roxy manager Sandy McNaughton and particularly Charlotte Gibson for their assistance in preparing the Roxy.