Bingara’s long-serving weather watcher, Trevor Withers, is able to continue his hobby and commitment to inform Inverell Radio 2NZ of Bingara’s temperatures and rainfall from his new home at Touriandi Lodge. 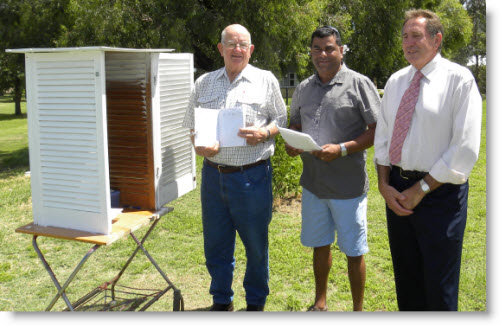 Former manager of 2NZ, Greg Kachel, set up the weather station at Trevor’s Martyn Street house in the early 1990s, and appointed Trevor to the position of weather reporter, a role he carried out with dedication and distinction.

“Trevor often rang 2NZ for a chat and telling us about Slim Dusty and all things Bingara and would give us an informal weather reading, so when we decided we needed to provide a regular weather service he was the obvious choice and he was dedicated 110%,” Greg said.

“If he wasn’t there (very rare) Lyn would give us the information, and if there was a sudden change in temperature or rainfall he would always be on the phone. If there was a newsworthy event in Bingara he would also alert the newsroom to it. Some people might think he was paid, he has never received nor asked for one cent and has done it out of the goodness of his heart.”

“Saturday mornings he would ring with a racing tip, and I don’t know if he had an advance copy of Sunday’s paper with the results in it, but his strike rate was amazing!

“His love of all things Slim Dusty was obvious and I put him in touch with Rick Milne of People’s Paraphernalia fame and they have developed a long friendship.

“I knew that Pat Stewart at Green Valley Farm loved Slim Dusty as he had played out there and stayed there. Trevor wanted to meet Pat so one day he drove up and I took him out to meet Pat. They talked for hours, showing each other their Slim Dusty memorabilia, and most weeks they chat on the phone. I defy anyone to know more about Slim Dusty than Trevor.

“I think he just loves people and his family – I could tell how lonely he was when Lyn moved to Tourandi.”

Some years ago, during a visit to Inverell, Trevor’s car was stolen from behind the Westpac Bank.

“That day shattered him – we offered to take him home but from memory his daughter did,” Greg said.

“I spoke to Braith Gartshore at Gaukrogers about looking after him with a good second hand car and Braith certainly did that and Trevor was delighted with the service.

“He became a friend to all at 2NZ and would often call in for a chat while Lyn shopped.”

Trevor’s move to Touriandi left the radio station without a Bingara weather reporter.

As well, Trevor missed doing his service for the community.

A few phone calls were made, and after a discussion between Trevor and Touriandi’s manager, Anne Withers, plans were put in place to install the weather station outside his room.

Greg Nicholls and Noel Johnson from the Bingara Men’s Shed made a new Stephenson frame from recycled louvred timber to house the thermometer and record book, and a new rain gauge was purchased.

Friends of Touriandi provided money to cover the cost of the new weather station.

Recently, Greg Kachel and 2NZ breakfast announcer, Gerry Taviera paid Trevor a visit to inspect his new weather station. Both men were impressed with the community effort to support their friend.

“Trevor is dedicated to informing people about what’s going on in Bingara,” Gerry said.

“He is obviously interested in weather and likes to keep people informed. People who live in a farming area such as Bingara are interested in rainfall.

“Trevor is very dedicated and when we heard that the weather station could be set up at Touriandi, he was delighted.”

Anne Withers said it is important that residents continue to pursue their hobbies and interests when they move to Touriandi.

“Trevor has provided a valuable service for many years, and we are very grateful to Friends of Touriandi and the Bingara Men’s Shed who have enabled this service to continue.

An early riser, Trevor is always ready with his weather information when Gerry rings early each morning. He even has a special pair of gumboots to make the trip across the dew covered lawn to his treasured weather station.

Rainfall figures for 2014
2014 was an average year in terms of rainfall with December proving to be the biggest month with just under 150mm of rain falling. July and November came in as the two lowest recorded months while the rest of the months only saw about an average of 25mm.

According to the Yearly Rainfall 2006-2015 chart we appear to be on a downward trend.

November and December tend to be the highest rainfall months with January and February bringing nice falls of rain to the area in recent years.

So far 2015 is shaping up to be a good year with some good consistent rainfall over the past few months.