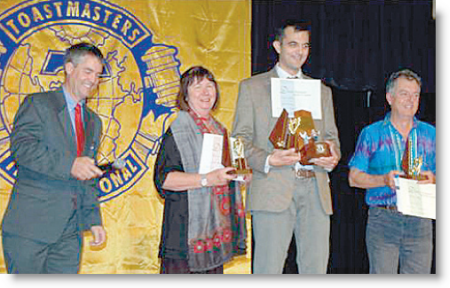 The presentation of trophies for the  Humerous section of the weekend’s Toastmasters Convention in Inverell, Chairman of Inverell Toastmasters with second place getter,Linda McDouall, the winner from Cairns, and the third place getter.

Linda won second place in the finals of the Humorous speech and while doing  extremely well to reach the fourth round and District fina of the International section, was unplaced in that section.  The next step for the weekend’s winner is a trip to compete in Las Vegas next year.

Linda said she greatly enjoyed not only the experience of speaking before an audience but actually writing her speeches.

“Sometimes it’s very hard to know just what the audience is going to find amusing,” Linda told the Advocate “but it’s a lot of fun putting the speech together.”

With regard to the International speech, Linda said that the actual content of the speech only accounts for around 30 percent of the points.“Your delivery, your engagement with the audience, your voice modulation and how you use the stage all count towards the finl score,” she said.

The subject of Linda’s humorous speech was a flight in a small aeroplane in the far north of Queensland.  Her subject for the International section concerned fruit and vegetable quality and the importance of back yard gardening with the goal of self-sufficiency.

The speeches were part of the four day Toastmasters District Convention which saw people attending from northern NSW, Queensland and the Northern Territory.