In the days leading up to the 18th annual Nashos Reunion which was held in Bingara March 9&10, organiser, Lucy Bilsborough feared the event would be little more than a ‘family get-together’ with just the core of regular visitors taking part.

She and other organisers were pleasantly surprised though, to find that about 70 Nashos took part in the march, with a handful who decided they were not up to the march along Maitland Street, instead waiting at the Memorial Park for the others to arrive. 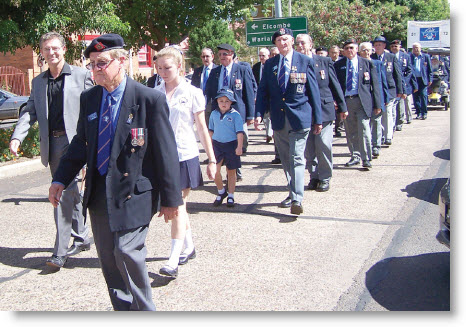 A pleasing mix of National Servicemen and local residents joined to take part in the parade before the Nashos ceremony in Memorial Park.

Amongst those who did not march this year was Wes Ting of Newcastle, who has been to every Nashos reunion since the first event in 1996. His friends, Kevin Newman and Ted Hornby-Howell, who have also attended all 18 reunions, took part in the march.

Wes Ting was accompanied by his brother Terry. Another brother, Mick, also came to Bingara for the reunion, but had to return to Sydney because of ill health. All three Tings brothers are members of the National Servicemen’s Association.

For the extended Johnston family, of Weston and Moree, the Nashos weekend is a not negotiable date on the calendar. Eric and Judy Johnston have also attended the reunion since 1996, and members of the family use the weekend to catch up with the couple.

Many other members have become familiar faces in Bingara.

The march, starting from the junction of Maitland and Finch Streets, was led by the combined Inverell and Moree Pipe band. A number of Central School students, in uniform also marched with the Nashos.

The salute was taken in front of the Council building by Member for Northern Tablelands and Patron of the Northern Tableands Nashos, Richard Torbay PM, Col. Chris Donovan, Cr. Peter Pankhurst and Mr. Austin Mack.

A short service in the RSL Park followed. The Last Post and Reveille were played by Stefan West, and the flags were lowered and raised by RSL Sub Branch members, Mark Nay and Denny Miller.

Following the service, lunch was served to about 180 people at the RSL Club. However, over 200 people signed the visitors book.

MC for the luncheon was Rick Hutton who also took part in the march and, with Patti Steiger, led the singing at the ceremony.

Nasho, John Brand, who has Bingara connections through his wife, entertained throughout the afternoon.

Mr. Hutton also entertained with a very amusing poem, and finished with his song “Oranges Everywhere”.