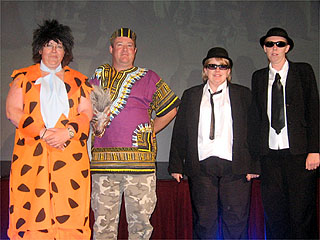 The local team ‘Prada’ came from a half time deficit to pip visiting Inverell team ‘Up the Back’ by just one point and take out the team prize at the Movies, Music and Mayhem Trivia Night held at the Roxy Theatre on Saturday, October 10.

The competing teams, including two from Inverell, showed considerable knowledge of Movies and Music and were able to wade through a range of questions about the silver screen and the juke box that were served up to them by Quizmistress, Ros Moulton.

The use of the BIG Roxy screen enhanced the evening with a variety of Movie clues displayed along with the BIG sound from Martin Hansford of Wombattracks Audio. Scores were displayed regularly on the screen and kept in order by scorer, Susan Hutton.

Many of the players dressed for the occasion in movie theme costume. Outstanding displays from Fred Flintstone, The Blues Brothers, The Wicked Witch of the West, Gidget, James Bond, and several other colourful movie identities won spot prizes for their costumes.

Many of the guests were eager dancers on the stage to classic music numbers that included the Maccarina, the Hokey Pokey, The Twist, and Shake Your Tail Feathers. The evening was hosted by the North West Theatre Company and the money raised will go towards the local Westpac Rescue Helicopter Support Group. The members of the Support Group provided a delicious supper during the evening.

Local group ‘Crotchets’ claimed two sets of prizes, one for the best decorated table, and the other for coming last in the Trivia. They received the ‘I should‘ve gone fishin’’ award for their efforts. It was a great evening and will be sure to be repeated to entice more Talented Trivia Teams to the Roxy Theatre.