BingaraLatest NewsGeneralA love of fashion draws Lenore back to retail

A love of fashion draws Lenore back to retail

For Bingara’s newest business, it is a return to what owner, Lenore Kennedy knows best; retail.

Lenore, who for the past 12 years has worked for council, mainly in the Home Support Services and Community Transport area, was looking at a change of direction, so ‘Dewberry Lane’ was born. 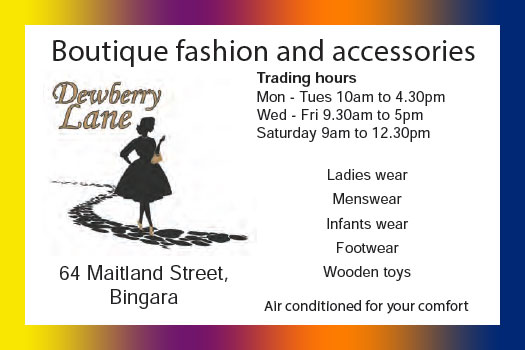 “I enjoy fashion, people, and accessories, Lenore, who worked for 15 years at H. Fay and Sons, said.

“I knew I could do it, and the building became available as the same time thinking of moving into something else.”

Lenore said she has responded to a gap in the market, and is confident that she has made the right decision.

“People have remarked that it is beautiful to have clothing again in Bingara. And country women do like colour,” she added.

“My price points have been accepted very well, and clothes range from small to 3XL.”

She carries a range of clothing, footwear, bags, wallets, accessories, and has ‘dabbled’ in menswear with jeans, pants, shorts for sale.

An infants corner addresses a real gap in gifts available for small children and babies, including a range of unusual wooden toys. The shop, formerly the site of Villa Rouge, was once her father, Len Dewberry’s barber’s shop.

“Mum and Dad came to Bingara in 1952, where Dad worked as a barber for Col Hancock in this building, and a year later bought the business.”

In the early 1980s, after he and his wife Alma had bought the newsagency, Len Dewberry moved to a room at the rear of that business and operated his barber’s shop from there.

The vacated shop then became the Bingara Tourism office, then Villa Rouge under the ownership of Nancy MacInnes, and later, Christine Smyth.

With the help of her family, the Kennedys set about transforming the empty shop to the fresh, vibrant space it is today.

Lenore’s husband Peter pulled up old flooring and painted the shop throughout, and made good use of a Christmas visit from their two younger sons, Sam and Andrew.

Andrew, a builder, built the fittings for the shop, while Sam worked on assembly, pricing and computer work while their eldest son, Matt, gave moral support from afar.  Air conditioning was installed by another former Bingara lad, Mitch Anderson.

Lenore sees her business as complimenting the other businesses in town.  “It does not overlap at all, I have not intruded on anyone else’s stock,” she said.

“I am more than happy for people to come in and browse, I want to make people feel welcome,” she said.

As well as the advertised times of opening, Dewberry Lane will occasionally be open on Sundays.

While retail has changed a little from her days managing drapery, menswear, ladies wear etc. at H. Fay and sons, Lenore said she was surprised at how easy it was to get back into the swing of retail.

“(At Fays)we were a member of a large buying group, specific for members, but as a stand alone boutique, I deal with wholesalers in Sydney,” she said.

While it is easy to buy her stock on line, Lenore still plans to take buying trips as she says she likes to actually see and feel the stock she is buying.

The night before she opened, Lenore was surprised when her mother, Alma, made the trip from the Central Coast to be part of Lenore’s special first day in her own business.

“Mum arrived with her two sisters and Sam, but Dad was unable to make the trip,” Lenore said.