When Major Jason Otter paid an impromptu visit to the students of Bingara Central School the day before Anzac Day, Principal, Mark Vale invited him to address the whole school, which had assembled to commemorate Anzac Day. 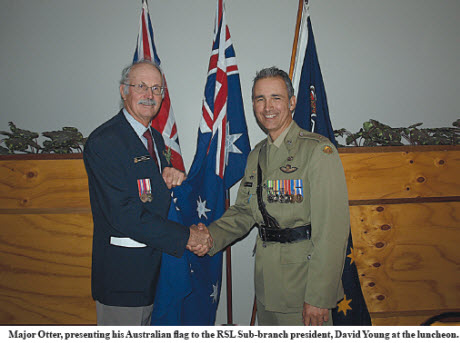 Major Otter linked his “off the cuff” speech back to his days as a Bingara boy. He talked about the values he learnt growing up in Bingara, which he took into his career in the Australian Army. The students were fascinated to hear Major Otter talk about flying helicopters in Afghanistan during his two tours of duty there.

The message the Major delivered to the students was that it doesn’t matter where you’re from, whether it’s from the city or a small town like Bingara, if you work hard, you’ll achieve your goals.

Major Otter’s goal to make a career in the army was ignited when he heard a talk about life in the Australian Defence Force when he was a student. Major Otter also spoke of an incident that reinforces the saying that “it’s a small world.” It was while he was in Afghanistan flying helicopters that he came across a soldier servicing helicopters. To his amazement, it was someone he had shared classes with at Warialda High School.