Former Mayor of Bingara Shire, John Wearne AM, returned to Council to present a Local government NSW Certificate of Appreciation to former Councillor Peter Pankhurst who retired after serving 33 years on Bingara and Gwydir Shire Councils. 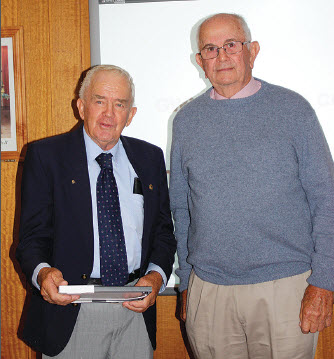 “Years of service are one thing, they demonstrate stamina and perseverance, but what you achieve in those years is another thing. “When Peter and I came to Bingara Council in the early 80s, it was a very conservative Council, they were operating more as a bank than a service organisation, we had $3 million in the bank, which was a very nice fighting fund. That period in the late 80s and through the 90s were probably the most significant period that Bingara has ever had.

“There were decades in the past where a lot happened, but in terms of making progress and positioning your community for the future, those years were absolutely vital. “You only have to walk up the main street, because that was one of the big projects, the Roxy, the Medical Centre, all those things done during Peter’s tenure left a wonderful legacy and set this community up economically. It is not only the years that this bloke served, it was what he achieved during them that I think is the most important of all.”

Mr. Wearne paid tribute to Peter’s wife, Brenda, who, he said is a very high profile person in the Bingara community.

“Peter couldn’t have done half those years without Brenda’s wise counsel and total support,” he said. “Peter it wasn’t the years, but how they were spent, and what you actually did that I will remember the most.”

In reply, Mr. Pankhurst spoke of the times he had used his Mayoral casting vote, with the help of John Wearne and Charles Bull, to instigate the changes which Mr. Wearne spoke about.