Martial Arts students step it up

Thirteen students from the Bingara Martial Arts School attending a Martial Arts Grading at Macintyre High School in Inverell on Sunday May 6. The Grading started at 9:00am and went for three hours with students demonstrating Kata’s, Kicks, Strikes Etc. Sensei Charles Baker, Bingara Martial Arts instructor was very pleased with the level of effort and skill shown by his students.

“All Students did extremely well and I am very proud of what they have achieved,” said Sensei Charles. Sensei Charles Baker didn’t know he was being tested during the grading but he received his second Dan. 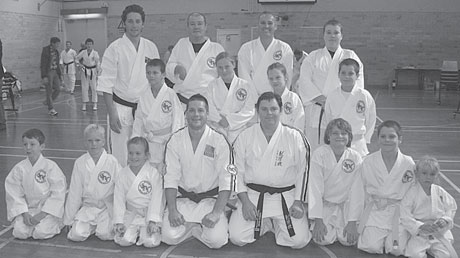 All the students pictured in the photo each stepped up a level. David and Kurtis Brennan were promoted to a brown belt, Crystal Cooper and Sam Briody were both promoted to a yellow belt red tip and Gary Hanson, Kane Evens,Georgia Curtis, Jack Armstrong, Bailey Curtis, Dylan and Brooke Mc Kinnon, Josh Armstrong and Eliza Hanson were all promoted to a Yellow Belt.

Martial Arts Classes are held at Bingara Central School at 6:00pm every Tuesday night in the school auditorium.