Mrs Alison Hosegood received an extraordinary package in the mail two weeks ago. She knew what it contained. It had come from Fromelles, France via the War Memorial in Canberra.

After opening a series of boxes, she felt “an odd feeling, somewhat sad” to see a metal matchbox, safely enclosed in a transparent protective box. 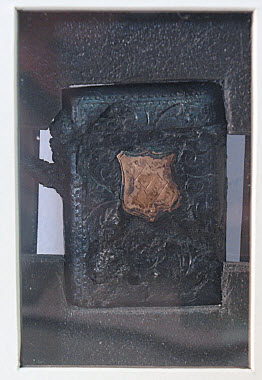 [Left: The metal matchbox of Mrs Hosegood’s uncle who died at Fromelles in 1916 safely enclosed in a transparent protective box.]

On the front of the matchbox was a small brass plaque bearing the name Cyril Johnston and the date 1915. Cyril was Mrs Hosegood’s mother’s brother, who had been killed at Fromelles in Northern France in 1916. Underneath his name, the year 1915 is visible.

The matchbox, which had once contained wax matches, was a gift from the people of Delungra to Private Johnston, prior to his departure for the war. He was 23 years old.

For more than 90 years, the bodies of over 1,300 Australians and 350 British soldiers killed at Fromelles remained unaccounted for.

In May, 2008 Lembas Englezos, a retired Australian schoolteacher, who had made it his life’s work to find the missing soldiers, located a mass grave in a small field on the outskirts of Fromelles.
After the battle, the dead Allied soldiers had been buried by their German counterparts.
The Germans had placed the bodies of the men in lines of 25, two deep, with a layer of soil between them, in eight separate pits.
The separation of the bodies made the task of identifying individuals possible.
Using the DNA of Private Johnston’s relatives, he was one of the first soldiers to be identified, according to Mrs Hosegood.
Private Johnston’s matchbox, which had remained in his coat pocket for more than 90 years, provided additional confirmation that the body was indeed that of Cyril Johnston.
The matchbox, which is extremely fragile, will be on display in Delungra on ANZAC Day. The descendants of Cyril Johnston intend donating the precious matchbox to the new Fromelles section of the Australian War Memorial in Canberra.
In July, 2010 Mrs Hosegood attended the reburial of the last of 250 British and Australian World War I troops recovered from the mass graves.
They were reburied with full military honours at the Fromelles Military Memorial.
Fromelles was the first major battle fought by Australian troops on the Western Front. The attack occurred between July 19 and 20, 1916.
The action was intended partly as a diversion from the Battle of the Somme that was taking place about 80 kilometres to the south. After a night and a day of fighting, 1,500 British and 5,533 Australian soldiers were killed, wounded or taken prisoner. The Australian War Memorial describes the battle as “the worst 24 hours in Australia’s entire history.”