McGowan picked in Under 16 Junior Cockatoos

Former Bingara Central School student, Rowan McGowan, has been selected as a member of the NSW Country Junior Cockatoos Rugby Union team for the 2010 season. 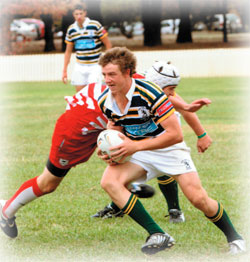 Sixteen year old Rowan, a boarder at The Armidale School, is one of four New England players included in the 23 man squad, drawn from seven country regions.  The players were put through their paces with an intensive training session before a final selection game at Myuna Bay on May 23.

The Under 16 Junior Cockatoos will compete throughout the year with the City Country Clash at Woy Woy Oval on the Central Coast, and in the ARU National Championships in October.

Rowan began playing rugby league as a member of the Bingara Minor League Under 8’s team.  He later gained rugby union experience in Barraba.  Rowan is also a member of the New England 16s Schoolboys team, and played in the Country Schoolboys Championships in Armidale on the June long weekend.

Alex Abra, also an ex Bingara boy and friend of Rowan will also play as a member of the Central North Schoolboys team, only on opposite sides.