BingaraLatest NewsGeneralMelanie Dyer to perform at this year’s Honey Festival

Melanie Dyer to perform at this year’s Honey Festival

Visitors to the annual Warialda Honey festival this year will be in for a special treat as they will be among the first people in Australia to witness Melanie Dyer perform the second single off her EP Lifetime, which will be released later this month.

The album is a fresh, kicky pop-country meld that embraces the fun in life, and offers the listener a feel-good experience from go to whoa. 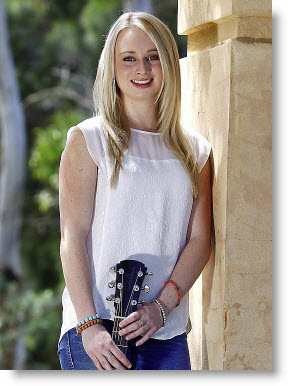 Mel will be a guest judge for the Honey I Got Talent contest. Photo sourced from dailytelegraph.com

Most people would remember Melanie from season one of the Channel 9’s hit reality music show ‘The Voice’ but some may not know that Mel is a local girl who was raised just down the road in Mt Russell, near Inverell.

Even before her appearance on the voice Melanie had been working hard to build her career in the music industry. Melanie graduated from Tamworth Camerata in 2006 & 2007 and is a 2010 graduate of the CMAA Academy of Country Music. In 2006 Melanie became involved in the NSW Talent Development Project where she continued to develop her singing and song writing. In July 2010 Mel became one of the youngest to ever graduate from the TDP.

Melanie’s highlights as a performer so far include featuring as a Soloist in NSW Schools Spectacular at the Sydney Entertainment Centre in 2006, 2007, 2009 & 2010, performing original songs in both 2007 & 2010. Melanie has also been honoured to perform her original songs at the Sydney Opera House, Convention Centre & Star City.

In 2012 Mel finished her schooling at Inverell High; she signed with Universal later in the year and made the move to Sydney in 2013.

Mel felt that coming from the farm, she identifies as a country girl, and has a country music as her foundation. But as she grew older, Mel absorbed the music of her generation.

“I started to experience different things and more of pop background started to be a part of me as well, so my style is story of a pop-country style, but it’s still evolving,” she explained.

She said Universal recognised that musical fusion and encouraged her direction. Mel has been putting lyrics on paper with guitar in hand for almost a decade, and sat down to collaborate with accomplished songwriter Lindsay Rimes. Lindsay’s songs have been snapped up by stellar artists like the McClymonts, Daryl Braithwaite, Tina Arena, and the Madden brothers.

Melanie said the opportunity to co-write with Lindsay and seeing the results at day’s end was incredible.

You have to throw it all out there. In a co-writing session you really have to throw down your fourth wall, and collaborating with him, I definitely learned a lot,” she said.
“And I think, the first time I heard Lifetime, which is the debut single that was released earlier this year, I think the last ten years of my life, my career in the music industry sort of all amounted to that moment, and I felt so right in that moment.”
“It’s an amazing feeling.”

She acknowledged the industry was a challenge, but it seems this young artist has already developed a firm philosophy to follow her passion.

“I think if you stay true to who you are, and be yourself, then you’ll do ok. You definitely have to love it, and I’m lucky that I do love it, but it can be hard and tests you at times,” Mel said.

“But it’s all worth it in the end, when you can hear something you’ve recorded from scratch.”

Mel will be performing as part of the “Honey I Got Talent” Talent Search and will be a guest judge.

Anyone interested in entering the talent search obtain an entry form by calling the Warialda Visitor Information Centre on 6729 0046 or visiting www.warialdansw.com.au/