Players defend well against experienced teams
Saturday May 7 saw The Mighty Advocate under 8’s face a double header at Gwydir Oval. In the firstgame, against traditional rivals The Warialda Wombats, Bingara fought hard with outstanding play by Jack Armstrong and Jake White and hard runs from Seth Keam.

Good defence by Will Johnson and Tyler Greacen kept the score line close.  Thomas Young burst through the defence and scored out wide thanks to great lead up work from Steven Todd and Andrew McGarrity.

The second game against Inverell East saw tired Bingara legs working hard to stay in the game although there was some skilful footwork from Toby White and Sam Mahoney.  Great defence by Isaak Johnson and Xavier Smith and great palming by Lincoln Barton kept the moral going.

The boys all enjoyed the games and it was great to see so much support behind them.  Similarly the under 10s played two matches.  Both were losses to Warialda and Inverell East, however, it must be noted that their opponents have been playing together for up to four years and as such have already mastered basic football skills; which many of the Bingara boys are learning for the first time.

Latrelle McLachlan played his fist match and, after warming up, tackled well and made a number of Benji Marshall like runs.  Clayton Southwell had two fantastic games in defence leading the tackle count.  Liam Mack was as usual tenacious in both defence and attack spreading the ball out wide and constantly backing up.  Rhyce Sydenham had new head-gear, which enabled him to see the opposition and track them down to the ground.

Jack Todd played particularly well in the second game making a number of breaks and tackling well.  Dylan McKinnon who started playing this year is grasping those basic footy skills quickly and is invaluable to the team. Joseph Smythe and Cody McGarrity supported in defence bringing down a lot of players after having made initial breaks through the line.  This was the highlight of both matches as, for the first time, the Bingara boys kept supporting one another by following up with tackle after tackle until they brought the player down.

Tim Johns played in a sportsman-ship like manner and tried really hard.  Thomas Honeysett, Campbell Bond and Lachlan Webb each had outstanding games.  It is the leadership and skills continually shown by these players that is forming Bingara into a formidable team.

Thank you to the referees, Graeme Mack, Hamish Abra and, in particular Taylor Holland-Wright.  Also to all of the parents who supported their kids and worked in the canteen and on the field, a huge thank you.

Two games well played by the under eights
The under eights, pictured below, last Saturday, May 14 played two excellent games of minor league against Inverell East and Glen Innes. The team is working well together despite this only being their third game of the season.

Although they were defeated by both teams the boys played well with some great tackling and defence. 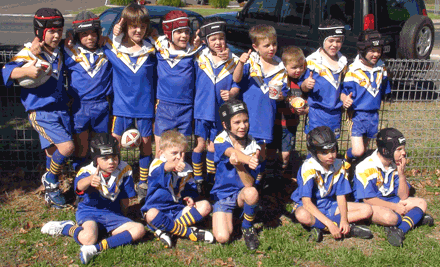