Players and their families turned out in great numbers for the Annual Bingara Minor League Presentation last Saturdayweek   at the Bingara RSL Club. 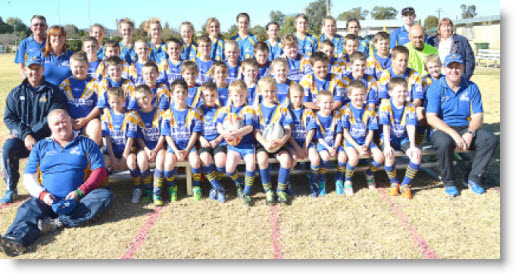 Players and officials pose for an end-of-season photograph.

In front of their families, all players were recognised with a trophy, team hoodie and photograph. Presenting the under 8’s award was Noel Watts and the Under 8’s prestigious award trophies went to;

Narelle Watts presented the under 10’s awards and the prestigious award winners were; Best and Fairest – Cody Gillogly, Most Consistent – Thomas Young, Most Improved – Sam Mahoney and the Coaches Player went to Peter McFarland.

Michael and Charlie Wilson travelled back to Bingara to present the Nick Wilson Team Memorial Shield which this year went to the Under 10’s who have battled all year with minimal players, sometimes against teams of 20 plus.

Mrs Audrey Carey presented the Frank Carey Supporters Trophy and this year, due to his immense generosity to the club, Sean Mahoney was the very worthy recipient.

Mrs Jean O’Brien attended the presentation this year alongside her Son’s Peter and Mark and other family members to present a new award – The O’Brien Shield. This award is presented to the fairest player of the season in memory of their late Husband and Father Bill O’Brien who sadly passed away earlier this year.

Bill was a founding member of Bingara Minor League and it was only fitting that there be an award named after him. In it’s inaugural year the O’Brien Shield went to under 8’s player Max Gillogly.

Thank you to everyone who attended to present the awards, to the Bingara RSL Club for hosting our event and to all the players and their Parents for the great season.