Minor League teams give it their all again.

Bingara travelled to Inverell to take on Inverell North on Saturday. In the under 8’s Sam Mahoney celebrated his 8th Birthday in style with a well deserved try.  Sam nearly scored a second try but was pulled down just short of the line. 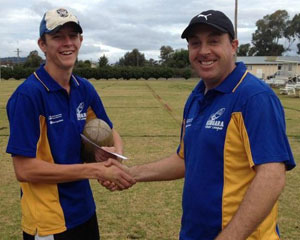 Thomas Young, proving he was too quick out of dummy half, scored five tries. Holly Mepham took the ball up well and made some great runs. Brooke McKinnon was in fine form and was rewarded with two tries. Toby White, scoring one try, was agressive in attack and scooted through the defence on a number of occasions.  Xavier Smith had a great game, running the ball well and Steven Todd, scoring twice, made a fantastic run up the side line, pushing defenders off along the way. 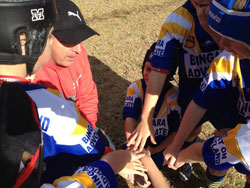 It was a thrilling game to watch and encouraging to see all the hard work at training is finally paying off.

[Photo: under 8’s preparing to take on Inverell North at Kamilaroi Oval on the weekend.]

The under 10’s were off to a slow start and it was 20-10 at half time to Norths.  Inspired by great defence and attack by Josh Armstrong it was a great all round team effort that turned the game around in the second half.  Final score 34-20 to Bingara.  Tries to Jack Todd (2) Dylan McKinnon (2) Jack Armstrong (2) and conversions to Dylan McKinnon, Jack Todd, Campbell Bond, Jake White and Tyler Greacen. It was great to see Seth Keam return to the field.  Excellent effort boys.

This week Bingara are at home to Inverell East. Game times are as follows

The under 16’s also have a game on Sunday which is a make up game from 2 June.  Kick off is at 10am on Field 1 at Kamilaroi Oval against Uralla.