By Louisa Butler.
Have you ever experienced the magic of our local bush by moonlight?

This is exactly what a group of about twenty people did when they joined Gwydir Ark on a spotlighting tour in the Whitlow area, led by Alex Dudley (reptile and everything expert) last Saturday night 11th March.  The group met beneath the trees by the creek at 7pm for a social chat and sharing of food. 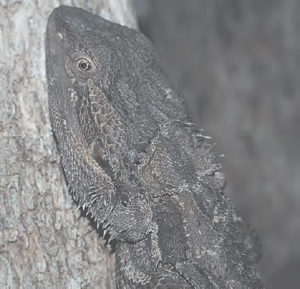 We had not left the car park when we met our first interesting creature. It was an Eastern Bearded Dragon.  This lizard is common to the area, but what was unusual was its dark, sooty grey colouring.  This was to change. We re-found it several hours later after the completion of our walk. This master of camouflage was distinctly a much lighter and more familiar grey colouring than when we first left it.

The walk set out at 8pm. We found several geckos, including the Robust Velvet Gecko.  This gecko is soft to touch; it is arboreal and it is well known as an occasional visitor to our homes where it catches insects on the windows at night.  The Prickly Gecko was my favourite.  This species often grows between 11 to 12 cm, including its tail in length.

The unusual thing about this gecko is its feet.  They have slim toes and strong claws, but unlike other geckos the Bynoe or Prickly Gecko do not have expandable toe pads. This lizard is common in open and dry woodlands and grasslands.  It is ground dwelling and can often be found sheltering in leaves or loose bark at the base of trees. 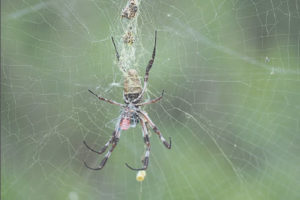 The children attending our walk were fascinated by the insects we found, especially the multitude of Orb spiders. They loved hearing that this spider ate its web every morning for the protein, and consequently had to spin a new web every day.

The bush cockroach, pictured, also brought squeals of delight. The adults were relieved to know that it was very different from the house cockroach; especially as it had not evolved wings for flying.

Koala sightings have been reported in the walk area. We were a little disappointed not to find this targeted species during the walk.  Nevertheless, it will all be happening again. Gwydir Ark will conduct another spotlighting walk in the Whitlow Conservation Area on April 1 at 7pm. All interested people are welcome to join us.