BingaraLatest NewsGeneralMost do the right thing, but some Easter fishers caught on the hop

Most do the right thing, but some Easter fishers caught on the hop

Easter fishers have been congratulated for doing the right thing, with the majority of anglers checked found to be fishing according to the rules, DPI Acting Director Fisheries Compliance, Tony Andrews. 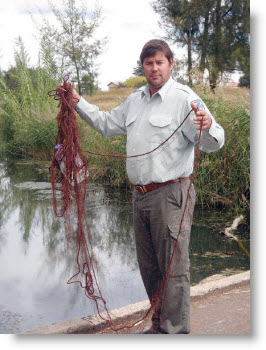 “DPI Fisheries Officers were out and about across the State conducting compliance operations over the four day Easter break, with more than a thousand fishers checked in the inland waters of NSW,” Mr Andrews said.

“In the North West zone, including the Macquarie River, the McIntyre River and a number of notified trout waters across the New England, Peel, Macquarie and Central Tablelands regions, 441 anglers were checked.

“Thirty-eight of those were found in breach of various fisheries regulations, including failure to have a recreational fishing fee license and illegal fishing by various methods.

“A man found fishing in the Gwydir River upstream of Bingara, was found in possession of a gill net and another man in possession of a prohibited size Murray cod. Meanwhile, two men were apprehended for having 20 set lines in the McIntyre River, upstream of Yetman and face penalties of using more than two hand held lines and leaving lines unattended in inland waters.”

Officers also conducted inspections of eight restaurants and mobile seafood vendors in the New England region, with one restaurant found to be in possession of 20 blacklip abalone and various other finfish, without the necessary documentation.

In the South West Zone, a total of 933 fishers were checked by fisheries officers with 85 persons not complying with the fishing rules and regulations.

“A total of 51 penalty notices will be issued for a variety of offences including not purchasing or carrying the recreational fishing fee receipt while fishing, possess prohibited size fish, possess illegal fishing gear and fishing in areas closed to fishing,” Mr Andrews said.

“One fisher allegedly took 7 Murray cod illegally on set lines in Merribit Creek, near Wakool. He has been issued with three penalty notices totalling $1100.

“Three men were also apprehended in the Murrumbidgee River above Burrinjuck Dam using a total 34 set lines and three unlawful traps. “The men have been issued with penalty notices with a combined total of $2800.”