The NSW Minister for Aboriginal Affairs, Mr. Victor Dominello, attended his first Myall Creek Memorial commemoration on Saturday, and was impressed by the activities of the day. 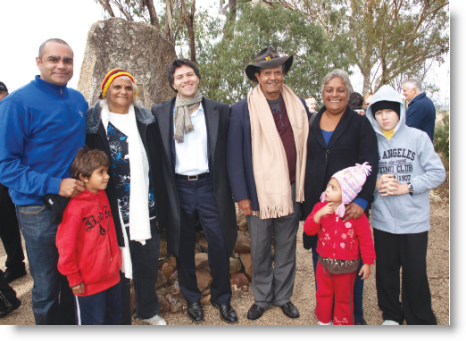 Mr. Dominello described the massacre in 1838 as “an irrefutable atrocity – whose ripple effects are still being felt today, after 173 years have passed.”

He said those attending, including himself, were at Myall Creek “because we understand the need to recognise the past, to recognise this dark part of our history.We understand that while time may take us further and further away from this tragic event that has scarred our past, we must come together to acknowledge the suffering that took place on this site.  It is about sharing our stories that make up our history. It’s about listening to one another.

“I believe that it is more than a ceremony; it’s about mutual respect for the experiences of one another, of the moments we have faced throughout our lives, and our mothers and fathers and our grand mothers and fathers lives.  We got out of bed in the icy, bitter cold this morning, so that we could recognise our past, so that we can move forward into our future.

“The Myall Creek massacre was one of the many such massacres that occurred all along the settlement frontier during the nineteenth century. However as many of you well know, this commemoration is of particular historical significance as it was the first time men were convicted and hanged for the massacre of Aboriginal people.

“So few of the wrongs perpetrated against Aboriginal people in the 18th and 19th Century are remembered in this way.  Having the courage to face such tragic events is a very brave thing to do. But we are here. And right now, nothing else is more important than that. We stand here together to grieve for those whose lives were taken away. For the Aboriginal people’s descendants whose lives were wounded by such injustices.

“We are here to pay our respects to the victims and their families, to honour those who pursued and punished the perpetrators, and show our support for all community leaders who work together in the spirit of reconciliation.  By being here, we are recognising their suffering and their loss. Their resilience, and ultimately, their dignity.

“The Memorial was 35 years in the making and after numerous attempts the grass-roots movements led by Kamilaroi/Weraerai people and Aboriginal community leaders, the memorial was born.

“The dialogue required to create this partnership is a reflection of true resilience and strength of the human spirit. It is a reflction of deep respect that exists between both the Aboriginal and non-Aboriginal people involved.

“I believe that this story is a truly meaningful one given that it is one of the joint search of commemoration. I believe it is one that cannot be forgotten.

“So while we acknowledge, while we remember and while we commemorate, we also commit ourselves to reconcile.

“I cannot begin to explain what an honour it is to attend such a significant commemoration in this beautiful part of the world. To meet everyone, both Aboriginal and non-Aboriginal who are a part of the story and to share with everyone an experience which I am sure will never leave me – I thank-you. I hope that as we stand here together unified,with our hearts full of grief  as our minds reflecton the past, our faces are looking in the same direction, towards the future,” Mr. Dominello said. 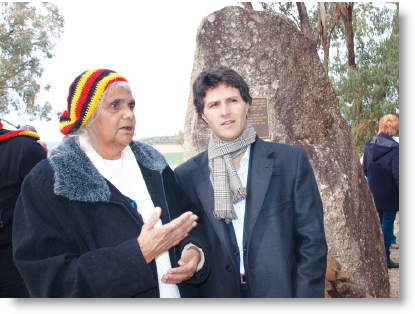 Elder and committee member, Sue Blacklock, with NSW Minister for Aboriginal Affairs, and Minister for Citizenship and communities, Victor Dominello MP at the Myall Creek Memorial on Saturday.