Warialda man, and long-time campaigner for reconciliation and the Myall Creek Memorial project, Ted Stubbins, was on Sunday awarded with Life Membership of the Committee. Accepting his award, Mr. Stubbins described himself as a sympathetic white fella, who has some book learning and has thought a lot about Myall Creek. 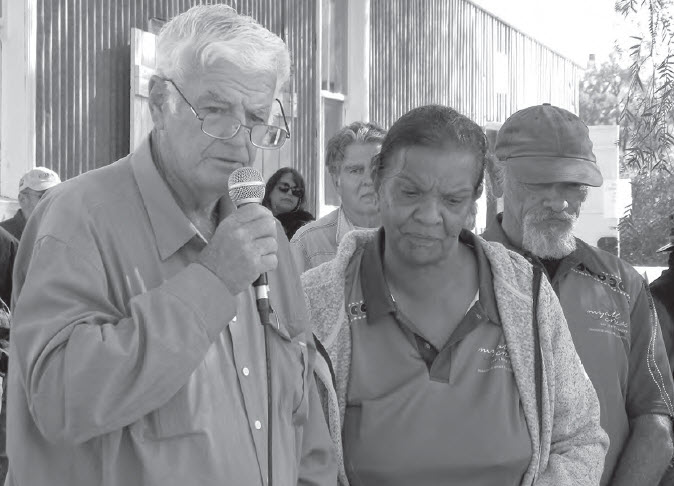 “Marilyn and I have worked for this project for over 30 years, keeping faith with Len Payne, who worked for at least 30 years before us,” he said. “Thank you, Ivan Roberts and committee members for the honour you bestow on us. Thank you, Colin and Marilyn Isaacs for the friendship we share and the regard for us you have shown.

“This is the place for contemplating the full truth of Australian history. Most people visit here as citizens of Australia, perhaps of the world. “They come to express empathy or seek understanding or both. Their time here should be enriching but not in material ways for them, or anyone else.

“The Aboriginal people were dispossessed, so that incomers could impose a new economy. It would be a travesty if the worst features of that dispossession were now used to support the imposition of yet another economy.

“The national importance of this place is too often misunderstood. It is not because a horrific mass murder occurred here. “Mass murder and lesser violence were only too frequent in colonial times as Aboriginal people were ‘dispersed’. “The mass murder here was especially atrocious because the perpetrators had become seasoned killers and were seeking novelty.

“But the national significance of Myall Creek is that it is one such event that was thoroughly investigated. Details became known and a measure of justice ensued. “And why was it investigated? Because one man, Frederick Foote, (and let it be understood that he was a landholder and grazier) travelled to Sydney and informed Governor Gipps, who instructed Magistrate Edward Denny Day to investigate.

“Frederick Foote’s key role is often overlooked. None of the otherwise excellent speeches today have mentioned him. “I doubt that we would be gathered here today, if Frederick Foote hadn’t intervened.

“If there had been more people like him and Gipps and Denny Day and those who stood up in court, we would have had a different history. We wouldn’t have had to hide it in the great Australian silence that persisted until the 1960s and still persists in some localities today.

“And incomers would have come to appreciate Aboriginal peoples sooner and learnt from them about this ancient land and how they treasured it in ways that we are only now coming to understand. “The secular shrine to the south east awaits. If it is always shown proper respect, it will be there, while ever Australia is Australia.

“Thank you, citizens and those who are bereaved, for your attendance here today,” Mr. Stubbins concluded.