By modern-day standards, the actions of the Myall Creek murderers were war crimes and part of a deliberate, state-sanctioned genocide of the Aboriginal people that today would be punishable by the rules of international criminal law, according to Senior Crown Prosecutor and author, Mark Tedeschi AM QC. 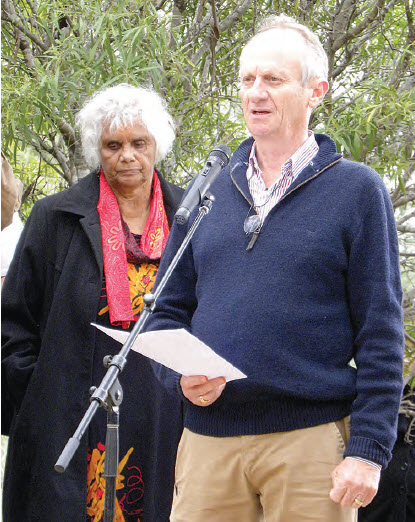 Sue Blacklock and Mark Tedeschi at the Myall Creek Memorial.

Speaking at the annual Myall Creek Memorial ceremony, Mr. Tedeschi, whose book “Murder at Myall Creek”, published late last year, spoke of his research.  He noted that the Myall Creek massacre was just one of a multitude of massacres that occurred all over Australia during a 120 year period, but is probably the most famous, and spoke of the massacre from a legal aspect.

“We know so much today about this one largely because of the investigation and the two trials of the perpetrators that were conducted in 1838,” he said.  “The man who successfully prosecuted the two trials of those responsible for the massacre was the then Attorney General of New South Wales, John Hubert Plunkett. It was, in my view, the greatest challenge of his long career and one of his greatest achievements.

“Unusually for the times, there were two trials that arose from the massacre, and both provoked enormous controversy and hostility throughout the colony towards the prosecutor. The powerful forces of the landowning settlers were pitted against Plunkett, and caused him endless difficulties.

“Plunkett’s approach to these prosecutions was innovative and bold in equal measure. His biggest hurdle was that despite the fact that there had been an eyewitness to the massacre – the indigenous station hand Yintayintin (known as Davy) – the law at that time prevented him from giving evidence in court. Plunkett spent the next twenty years trying to remedy this deficiency in the law – without success. New South Wales was, in fact, one of the last jurisdictions in Australia to allow Aboriginals to give evidence in court.

“The 1838 trials marked one of the few times in the history of Aboriginal displacement that Europeans were punished for the murder of Aboriginal Australians.  Those trials stand as an early statement of principle that Australian courts had at least the capacity to operate without fear or favour and to treat all people, including those on the margins of white society, equally.

“Plunkett’s advocacy and tactics at the second trial succeeded in persuading a jury of twelve white free men and freed men to convict seven white defendants for the brutal slaying of an Aboriginal child, who represented the twenty-eight members of that infant’s tribe who had been murdered. That Plunkett was able to do this in the face of almost universal hostility to the prosecution was nothing short of miraculous. It would never happen again during the colonial period, or even after the federation of the Australian States in 1901.

Tribute should also be paid to others who did the right thing in 1838:

Mr. Tedeschi said the trials failed to stem the tidal wave of annihilation of Aboriginal people.

“The hangings of seven of the perpetrators of the massacre merely served to drive future murderous acts underground, so that more surreptitious means, such as poisonings, were used instead of brutal, bloody slayings by sword or bullet or herding over cliffs or into swamps.

“In my view, the two trials in 1838 were more akin to modern-day war-crimes trials than to domestic murder trials, even though the concept of war crimes lay more than a hundred years in the future. There was undoubtedly an ongoing, internal, frontier war at the time, albeit rather one-sided, between the white settlers and the indigenous inhabitants whom the former were attempting to displace and disperse. In my view, the perpetrators of the mass murders at Myall Creek Station on 10th June 1838 were motivated by genocidal intentions and their actions were an example of what we now call ‘ethnic cleansing’. The subsequent sexual abuse of one female indigenous victim, who was spared her life, but only for what must have been a few excruciating days, illustrated the objectification of the victims.

In addition, the actions of the perpetrators can be viewed as a classic example of what has become known as ‘collective punishment’ – a form of retaliation whereby a suspected offender’s family, friends, acquaintances, neighbours or an entire ethnic group is targeted for punishment, and where the punished group may have had no direct association with the act that is being punished. The victims in this case had been living peacefully on Myall Creek Station for several months and had done nothing to justify their victimisation. Collective punishment has been categorised as a war crime since the 1949 Fourth Geneva Convention and genocide has been categorised as an international crime by the Genocide Convention that was adopted by the United Nations General Assembly in 1948 and came into force in 1951.

The fact that vast numbers of genocidal murders in colonial Australia went unpunished would today provide evidence of state sanction, and would today justify international intervention in the prosecution of the perpetrators and their national leaders. While such laws did not exist in 1838, the approach taken by John Hubert Plunkett towards the case was consistent with them, and demonstrated an enlightened and visionary attitude that was unparalleled in his time or for more than a hundred years afterwards. John Plunkett did not just prosecute eleven men for murder. He prosecuted his entire society for its connivance in the attempted annihilation of the Aboriginal people and their culture. His contemporaries, consciously or subconsciously, appreciated that fact, and as a result vehemently resented him during the trial and for years afterwards. It was a testament to his persistence and tactical skills that he convinced twelve jurors to convict seven of the perpetrators, because they were not only condemning those men to their deaths, but also stingingly rebuking their own society.

While the trials and the convictions did not prevent future massacres, they stand as a beacon of humanity and interracial justice that illuminated the way for Australia to develop as a civilised nation.

Australian schools have always devoted a lot of time to teaching students about the great, white explorers – people like John Oxley, Charles Sturt, and Major Thomas Mitchell. Very few schools, however, teach what almost invariably happened within a few years of the discoveries of the great explorers: the expansion of white pastoralists into areas that had previously been occupied by indigenous clans for millennia, the expropriation of their land, the destruction of their culture and society, and the massacres of tens of thousands of them in hundreds of locations all over Australia.

In my opinion, the story of what happened to the aboriginal inhabitants in colonial times should be taught in our schools as readily as we teach the exploits of the great explorers. The two accounts are inextricably intertwined. One almost inevitably followed the other. A real acceptance by mainstream Australia of the horrors that were perpetrated against our indigenous communities in the colonial period will bring with it an understanding of the long-term trauma that has been transferred down the generations until today. We readily recognise that the trauma of other genocides and crimes against humanity – such as those during the Nazi period in Europe, in the former Yugoslavia during the 1990s, and in countries like Rwanda and Cambodia – can be deeply felt for many generations after the killings have ended. If we acknowledge that Aboriginal communities were subjected to massacres in a multitude of locations all over Australia for more than a century, there may be more sympathy for the current generations striving for equanimity, understanding and acceptance. Until we recognise that what occurred was a war of extirpation or annihilation, until we acknowledge that what was perpetrated amounted to an attempted genocide that today would be categorised as a war crime, and until we teach this to our children throughout Australia, we will not reach our full maturity as a nation,” Mr. Tedeschi concluded.

Missing faces
Three men who have been heavily involved with the Myall Creek ceremony were this year unable to attend the event.
They Rev. John Brown, former Chairman of the Myall Creek Committee, Lyall Munro, descendant of one of the boys who survived the massacre, and Committee member, Ted Stubbins.