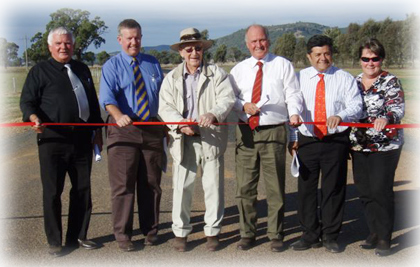 A large gathering witnessed Mr Quelch cutting the ribbon which was stretched across the road. Mr Quelch acknowledged retired Member for Gwydir, John Anderson’s assistance in gaining the $19million grant for the East-West link, going on to congratulate the Gwydir and Narrabri Shire employees, saying they deserve a lot of appreciation for the job they’ve done.

Member for Parkes, Mark Coulton was among the other guests who addressed the crowd, made up of Council employees who had constructed the road, local residents, Councillors, local members of Parliament and the Mayors of Narrabri and Inverell Shires. He started by congratulating the staff on their efforts in building the road, saying that it is now one of the great drives of the North West. Mr Coulton also suggested that if the roads continue to be sealed at this rate in the Narrabri and Gwydir Shires, the opportunities for tourism will increase.

Member for New England, Tony Windsor congratulated all who had been involved in seeing the road sealed, particularly the community. He made special mention of Mr Quelch, congratulating him for his persistence over many years, to see the road sealed.

Member for Northern Tablelands, Richard Torbay said it was fantastic to see the regional co-operation displayed in this project. “We deserve roads like this!” Mr Torbay said. He also said it was important to acknowledge the pride of the Council workers involved in the completion of the road. He also made mention of Mr Quelch’s contribution to local government in the 40 years he spent as a Councillor.

The Mayors of Narrabri and In-verell, Mrs Robyn Faber and Mr Barry Johnston both commented that it was great to see what councils can achieve with “a bit of government help.” Ex Bingara Shire Council Engineer, Jim Lane also addressed the gathering, having travelled from the coast to attend. He said that during the 15 years he had worked with Mr Quelch, he had been a staunch advocate for sealing the road. He said that of the 67 kilometres of road now sealed, only three were sealed in 1990, the last 17 being overseen by present Council Engineer, Alan Kerr.