A barbecue, a few brief speeches and a ribbon cutting marked an historic event last Wednesday when the last section of the Narrabri to Bingara Road was declared officially ‘open.’ The opening marked the long-awaited bitumen sealing of the once infamously rough road on the Narrabri Shire side of the range. 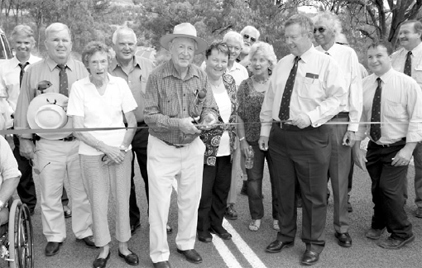 Long time resident Mr. Charlie Quelch has no illusions that the route is now going to become one of the most important, and best used, in the region. “This is a momentous day” he said he cut the ribbon to officially open the road, flanked by the Narrabri Shire Mayor Cr. Robyn Faber, the Gwydir Shire Council Mayor Cr. Bob Tremain and Member for Parkes Mr. Mark Coulton and watched by a contingent of road residents, Narrabri Council staff and Councillors and representatives of Gwydir Shire.

The roadwork has been praised as ‘first class.’ Mr. Quelch, a long serving member of the former Bingara Shire Council, said it was some of the best road building he had seen.  Equally impressive was the rate of progress, four kilometres of sealing each year for the past few years.  All that remains to be sealed now is five kilometres on the Bingara side of the range and that is scheduled to be completed by June, said Gwydir Shire Council Mayor Cr. Bob Tremain.

Mr. Quelch said he had hosted three barbecues at Killarney Gap for State Government officials as he had lobbied over many years for the upgrade and sealing to proceed. “There is only one more barbecue to hold now, the one to mark the completion on the Bingara side” he told the audience as he cut the ribbon. “ I look forward to using this road for many years. “This sealed road means a lot to the whole region for communication east and west.”

Member for Parkes Mark Coulton agreed that the opening was a momentous occasion. “If I could attend a new road opening every week I would be delighted” he said.  He said the new sealed route cut half an hour off his journey from Warialda to Narrabri rather than going through Moree.  And he predicted the route would be a popular one, funnelling traffic from the west through Bingara, and from the coast to Narrabri and the west. “It is a fantastic road” he added.

Cr. Tremain said the route now needed a name to help in its promotion.  He said ‘The Volcano Way’ had been suggested, but further ideas for names were welcome.