Members of the National Servicemen’s Association, some of whom have been coming to Bingara for 19 years, gathered in Bingara recently for the annual Nasho’s reunion.

The brainchild of the late Ken Bilsborough, who started the reunion to give men who did National Service together the opportunity to renew acquaintance, the reunion is deliberately quite low key. 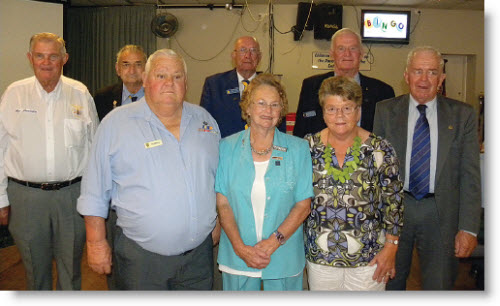 National Servicemen’s Association President, Ron Brown, Member for Northern Tablelands, Adam Marshall, and Cr. Peter Pankhurst took the salute in front of the council building as the marchers made their way up the street.

At the conclusion of the march, a short ceremony was held in the RSL Park before lunch inside the club.

There were some short speeches during the luncheon, including a welcome by Mayor, John Coulton, a short address by Ron Brown, who paid tribute to the work done by Lucy Bilsborough and her helpers, the pipers and drummers, the Central School, Bingara RSL staff and RSL sub branch members.

State President, Ron Brown paid tribute to work done by Lucy Bilsborough and her helpers, including the pipers and drummers from Inverell and Moree, the Central School, the Bingara RSL staff, and RSL sub branch.

Attending his first Nashos’ reunion, the Member for Northern Tablelands Adam Marshall, one of the youngest in the room, told the gathering he is part of a generation who “can’t get our heads around what it would be actually like to be in a position where you put your lives on the line for something greater than yourself”.

“But that in no way diminishes our gratitude, and my acknowledgement and thanks for the service you have given the country,” he said.

Rev. Dr. Henry Martin, who took part in his first Nasho’s reunion was also thanked, as was MC, Rick Hutton, who, with Patti Steiger, sang at the service.

Organising committee member, John Carruthers, from the Central Coast, who helps Mrs. Bilsborough organise the reunions, announced that the committee had decided that next year, the 20th year of the reunion, will be the last to feature the street march, due to the age of the participants.

“Our members are aging, I have had a meeting with Lucy Bilsborough and other committee members. The reunion will continue, but after next year, there will be no march,” Mr. Carruthers said.  Certificates will be issued to those who march next year.

“We have done well to go as long as we have, when we started, it was said if we get past three years, we will be lucky, we have gone for 19 years, so let’s make the 20th reunion a great one,” he said.

A farewell barbecue was held at the caravan park on Monday night before the last of the Nashos wended their way home, vowing to return to the big 20th anniversary celebrations.