Riders and their horses competing at the Bingara Showground will now be camping in five-star accommodation with the second new stable block funded by a $50,000 State Government grant officially complete and operational.

Member for Northern Tablelands Adam Marshall saddled up and inspected the facilities with Gwydir Shire Council Mayor John Coulton and representatives from the Bingara Pony Club and Bingara Jockey Club.

“Bingara has an incredibly active equine community and now it has the facilities at the Showground which will allow it to grow and encourage more events,” Mr Marshall said.

“This is the second lot of stables the State Government has supported in being upgraded and while the old stables had character they were dilapidated and prone to flooding, now the Showground has an updated modern steel 20-lot stable which will be able to handle an increase in events at the grounds.” 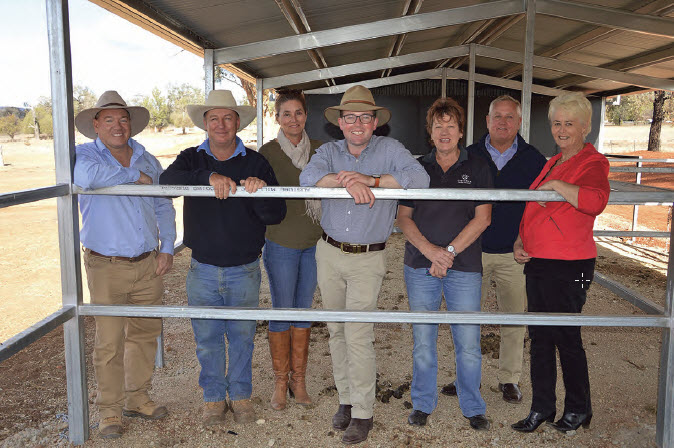 The Bingara Showground has undergone a major revamp over the last three years, with $80,000 in government grants allowing upgrade works also on the first stable block and old ring fence.
Gwydir Shire Deputy Mayor Catherine Egan said the new stables had already been used for the Bingara Show and by Bingara Pony Club.

“Bingara Showground is one of the most well utilised facilities in the community and to have the new stalls ready to go, I think will encourage other horse sports from across the region to consider the showground as a potential venue,” Cr Egan said.

“Along with the new stables a swob box has also been installed where stallions can be put and kept away from other horses, improving safety for both riders and other horses.
“I want to thank Adam for his ongoing support of efforts to improve the showground.”

Round 1 and 2 of the SCCF delivered more than $1.5 million for 18 projects across the Gwydir Shire Council area with a further $775,357 now available for projects in the shire through round 3, which is open now.

For more information and to apply, visit www.nsw.gov.au/SCCF