Nearly 50 people attended the sale which was held at the Bexley sale complex.
Forty one bulls were offered with a top price of $4500 being bid three times. The average price for the bulls sold was $3688. 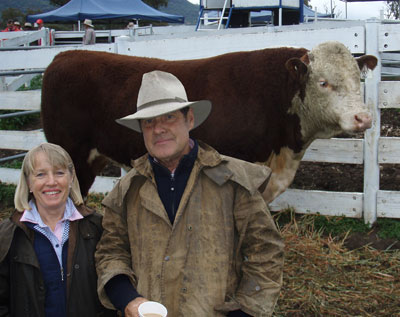 Lil and Richard Westmacott travelled from Young to buy at Courallie J.

Elders auctioneer, Andy McGeoch said at the commencement of the sale “Every second day I sell Angus bulls and none are half as long as the ones you’ll see here today.”

Mr McGeoch went on to say that in the United States, the feedlots are insisting on white faces for their proven palatability and quality.

Prior to the sale, Co Principal, Jim Hann expressed his gratitude to Doug, Sue and Jason Salier for the use of their yards. He also made mention of the recent success of Irish Hereford Prime in the European World Championship Steak competition, saying “Herefords are hopefully on the move.”

There were a number of return buyers at the sale, Denis Forrest of Manilla purchasing two bulls for his core herd of Herefords.

Mr Forrest complimented the preparation of the bulls saying “the top bulls were quite outstanding. I expected them to make a lot more money.” The bulls he purchased will be joined with the cow herd on his Trevallyn property. The progeny will then be sent to Mr Forrest’s other property at Manilla where they will be fattened on oats. Mr Forrest told the Advocate that his Hereford herd dates back to the 1920s.

First time buyers, Richard and Lil Westmacott from Spring Park, Mont Eagle near Young said they were very impressed with the length and structure of the bulls on offer.

Mr Westmacott runs a straight Hereford herd, growing the steer portion out to approximately 400kg yearlings for the feedlot market.

The nice temperament of Herefords is one of the reasons he stays with the breed, he said. Mr and Mrs Westmacott bought two bulls for the top price of $4500.