After some months of services with lay preachers and ‘borrowed clergy’, St. John’s Anglican Church again has a resident Vicar.

Earlier this year, Bishop of Armidale, Rick Lewers, asked Gordon Stewart and his wife, Olita, to come to Bingara to get the Church through the Easter period. 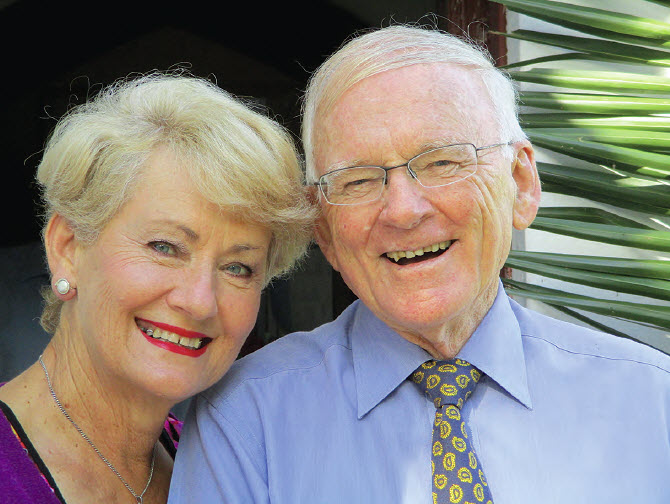 Gordon and Olita see themselves as a ministry team. Both have a keen interest in reaching young people.

Born in Inverell, Gordon grew up in Sydney, where he became a Christian at the age of 14.

He graduated from university with a degree in Diagnostic Radiography, and for several years, worked in both public and private practice. During that time, Gordon maintained his dedication to spreading God’s word.

In the 1970s, Gordon studied Theology at Moore College, and was licensed by the Archbishop to be a Diocesan Lay Preacher.

Since his ordination in the late 1990s, Gordon and Olita have moved around the country in non- stipendiary roles, often staying longer than they first intended.  “Our hearts are in Christian Ministry,” Gordon said.

After his ordination, Gordon and Olita left Sydney and the medical world, and moved to Tamworth as Vicar at South Tamworth.

When they arrived in Nundle for a short stay which turned into 17 years, Olita fell in love with the hills and the town, so the couple bought a property there which they still own.

A short term stay at Uralla became 16 months, and Gordon has worked at Grafton Cathedral.

Olita, also a radiographer, continued working in the region as a radiography locum. Bingara was a work destination for her when she was working at the Inverell Hospital.

With the Bush Church Aid Society, which helps to support financially in country and isolated areas, Gordon and Olita moved to work at King Island, which they enjoyed very much.

Both Gordon and Olita are looking forward to the annual Bingara Youth Muster, a program instigated for former Vicar, David Swan.

The Youth Muster will be held at the Bingara Showground from May 19 to 21, and seven young people from the parish will be attending with support from the parish.

Gordon has combined his radiography knowledge with his faith and has hosted a ‘blokes breaky’ at the Imperial Hotel, where he showed three x-Rays, to present the anatomy with a Christian perspective. Using the anatomy of the gut, head and chest, Gordons talk, which he labelled ‘The X Factor, A Peep Inside’, explained how the Bible is the ‘heart’ or the life of a person. Following the success of this ‘blokes’ breaky’, Gordon was invited to address the Bingara Lions Club.

He has also just concluded, with 28 people taking part, a Christianity Explained program.

Soon a Youth Group will commence, and on Monday week, a group will be meeting at the Vicarage to study the early chapters of Genesis. So far 15 people have expressed interest in the sessions at 10am and 7pm.

Gordon and Olita will attend Council’s welcome to newcomers on Thursday night.

In their spare time, Gordon and Olita are both keen gardeners. At their Nundle home, they grow many roses, and before that, when they lived in Tamworth, they opened their garden for the Australian Open Gardens scheme.