Bingara man, Anthony King has described his recent trip to New Zealand to play in the Deaf Rugby test as “a real eye-opener”. 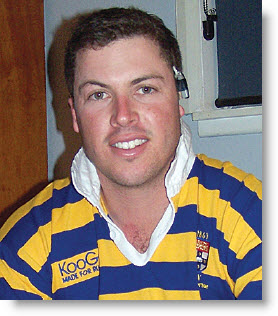 Anthony, pictured left, was part of the 22 man squad which toured for 14 days, returning on November 6.

“Rugby in New Zealand is a whole new level, they take the game very seriously, it is a way of life for them,” he said.  As they travelled around the country, people the team members met were all ‘mad about rugby’.

“The firstpresent a child receives is a rugby ball, and they just take it a lot more seriously than we do here,” Anthony said.  “You don’t realise how seriously they take it until you get there."

"Watching the Haka was very special.” Anthony said that while the haka was not intimidating, “it gives you pins and needles a bit.”

“I didn’t realise they have several different haka until I went over there, and the one they gave us was very aggressive. There was a local with us, and he said ‘they meant everything today, they are coming at you.’ It was good,” Anthony said.  “When they punch the ground, you can feel it.”

After four days of training, the team played one test in Auckland in North Harbour Stadium, and won 22-20. They were presented with the very impressive crystal Cochlear Cup.

The size of his opponents also impressed Anthony.

The players and their supporters flew to Auckland, trained for four days before the match, then drove up north, then down south, and flew out of Christchurch.  “We did about 3,000 kilometres, and met a lot of nice people,” Anthony said.

Next on the agenda for Deaf Rugby Australia is another game against the All Blacks in Canberra, then trial game at the end of February, where the team to travel to England will be chosen.