No joy for X-Rated Frogs 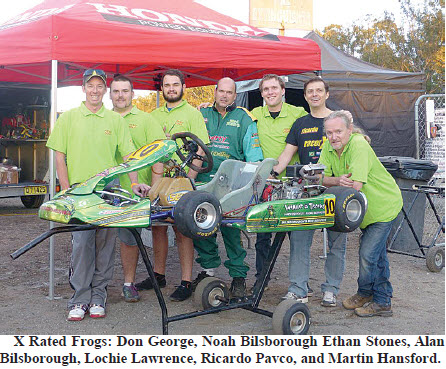 After qualifying 9th out of 22 teams, involving 140 combined drivers, the Frogs were involved in what Boss Frog, Alan Bilsborough, described as “a fairly heavy contact race incident” early in the race.

The kart sustained significant damage, but the team was able to repair it and continue the race.

“Due to the incident, we were quite a few laps down, and had some mechanical dramas which we fixed,” Alan said.  “We were going well though, and a lot of other teams faced dramas too. We were in 16th position at about the 12 hour mark, and climbed our way up to 13th position making strong progress through the field”.

Just when it looked like the team would make it into the top ten “all hell broke loose” when an over ambitious move by another competitor took the Frog out.
This was a serious incident, the kart was badly damaged and nolonger competitive.

With two hours to go, team member Ethan Stones limped in with clutch failure which looked like it would be the finish for the Frog. The team refused to concede defeat, and Ethan went out again for another hour and a half. More repairs were required, and the race stewards allowed the team to finish the race.

“We were very bruised and battered, but we finished, that’s the main thing,” Alan said.
“We had a great team, very good kart and in the tradition of frogs, a never-say-die attitude.”

After the race, the X Rated Frogs were judged best presented by the officials on the course. This is judged on appearance of the kart, uniforms and teamwork.

Although the Frog team didn’t push an official complaint, the competitor who crashed into their kart was excluded from the event by track officials.

Alan was driving the kart when the first crash occurred. Others who were involved in incidents were team-mates, Ethan Stones and Martin Hansford.

The team finished 18th in the event. Now they have six weeks to prepare for the championship round.

With the X Rated Frog written off, the team has very little to start their campaign.