BingaraLatest NewsGeneralNo rain yet, but Alf gets some relief Farmers

No rain yet, but Alf gets some relief Farmers

Alf and his daughter, Rhonda King, have been praying for rain. The quintessential image of the drought stricken farmer has brought media attention to the small town of Bingara. With very little rainfall over the past twelve months the situation for this community has been dire.  [Read Nine News article…] 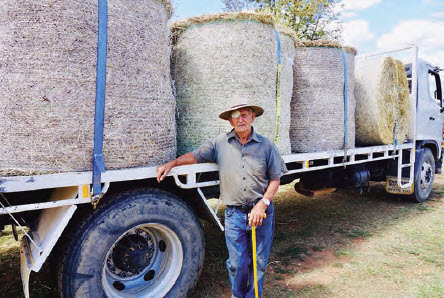 A very happy, and much relieved Alf King.

Over the last six months the coastal community of Bangalow has been doing their best to assist Bingara in this difficult time. The initial distribution of over 300 grocery hampers was well received by all.

Since then Bingara has taken delivery of many truckloads of hay, molasses and calf nuts. The distribution of these much needed resources has been reliant on a ballot system which was decided upon as the drought was affecting all farmers who were dependent on the land for their income, not just a select few. So, rather than trying to decide who was needier than their neighbour, every landowner was added to the draw.

It took a while, but Alf, along with 16 others, finally had his name selected.  Alf and Rhonda took delivery of eight round bales of Setaria grass hay and two drums of molasses. Rhonda said “This is lifesaving, it couldn’t have come at a better time”.

The community of Mullumbimby has also been providing assistance to our farmers and food bank hampers were given to all those receiving fodder. The assistance that our little town has received has been greatly appreciated. The generosity and commitment of our coastal cousins will long stay in the hearts of Bingara.