Long standing school bus drivers, Noel and Betty Johnson have retired. The end of the school term saw the end of an era for Noel and Betty, who have been driving buses, in Noel’s case, since 1960 and for Betty since 1973. Noel also closed his Johnson Brothers garage on Friday of the same week. 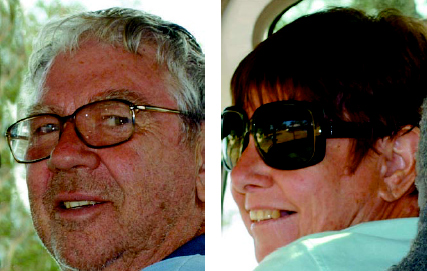 Noel started driving buses when he was 18, running a commuter and freight bus five days a week to Inverell. School students also used the bus, travelling to school in Inverell on Monday mornings and returning Friday afternoons.

On Saturdays, Noel worked in his father’s garage, where he learnt to be a mechanic, a panel beater and in Betty’s words “a jack of all trades”.

Noel bought the Castletop bus run from Rex Smith in 1981. Noel’s memories of the run included “lots of up and downs and that wasn’t just the road!”

Over recent years the Narrabri road has been gradually sealed, but Noel had to drive over more than 30 kilometres of gravel, four times a day for many years. Noel reckons he has driven over two million kilometres in the time he had the bus run.

Betty drove the Gineroi school bus for 36 years, during which time she said she had two kids who gave her trouble. “I had a dream run,” she said.

In recent years Betty and Noel ran a charter and tour bus in addition to the school buses, which Betty said she loved. She said “it brought out the gypsy in me!” Children who travelled on Noel and Betty’s buses will remember the Christmas parties they held each year for their passengers. The children would go to Noel and Betty’s home for a party on the last day of school.  In 2000, the timetable for swimming school changed which meant the party could not happen.  Since then, Noel and Betty’s passengers have received a Christmas parcel of chips and lollies instead.

At Bingara show time, Noel would often take the children home via the showground so that they could see the preparations for the annual event.

The weather played havoc with the school buses, particularly in earlier years when it seemed to rain more often! Children would be called home early to avoid being stranded by flooded creeks.

On more than one occasion, Noel and Betty put children up overnight who could not reach home, due roads being cut by floodwaters.  Noel and Betty have also been greatly appreciated by property owners along and near the school bus routes. Not only have they safely taken children to and from school, but they both regularly delivered provisions, drenches and spare parts as well as lifts to and from town.

Noel has been working on one of their coaches, converting it into a motor home. So, Noel and Betty will continue to drive, but they’ll be touring around Australia rather than taking the same road every day. They intend starting their travels in Tasmania in February, which was a surprise to some who know Noel. He was heard to gruffly say, after taking a tour to Tasmania, that it was a “b****** of a place – never stops raining!”

In 2010, Phil and Shirley Brien will be taking Gineroi and Castletop school bus route children to school having purchased the runs from the Johnsons.