NSW farmer inspires others to Help a Mate

The concept of ‘mateship’ as a tool for conquering depression is something only a man used to making the best of a bad situation could come up with. Anglicare Northern Inland (ANI) is bringing John Harper to “Ceramic Break Park”, Warialda as a guest speaker at the Building Resilience workshop on Thursday, May 21. 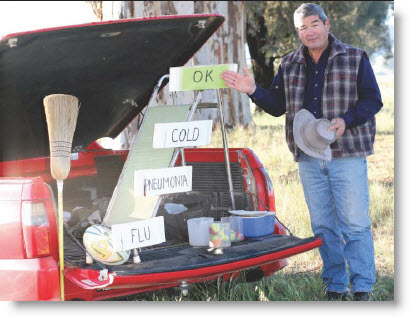 Dryland and sheep farmer, John Harper will be promoting mental wellbeing
awareness at Ceramic Break Park next Thursday, May 21.

John Harper is a dryland wheat/sheep farmer from Stockinbingal in Southern NSW.

Married with three daughters John’s simple goal in life was to be a better than average farmer and hand over the family farm in good condition to his children. Depression nearly destroyed John’s opportunity to fulfil this simple goal.

John Harper has been actively promoting awareness about the need for mental wellbeing in times of stress and anxiety. These feelings are often present for those working in a rural environment, particularly during drought, and after experiencing depression himself John decided to help others in a similar situation.

In 2006, he established a grassroots self-help program in Stockinbingal called Mate Helping Mate. Since then, John has raised awareness of mental health issues, organised social activities, and arranged for small rural communities to visit other small communities to provide mutual support during the drought.

His informal approach over a sausage sizzle and a beer has encouraged men to open up and discuss their concerns.

John believes isolation is one of the main contributors to depression.
“Isolation leaves us with self-doubt that brings us undone … It’s bloody dangerous,’ he says.

John has tried to reach out to as many isolated men as possible. In 2007, the Mate Helping Mate DVD was released in conjunction with St Vincent de Paul and John distributed thousands of copies throughout NSW. John’s concept has been such a success it is now being used as a model for other rural communities.

At the workshop, John’s talk will lead into a series of concurrent short courses including “Stress”, “Depression”, “The practice of Wellbeing”, and “Grief and Loss”. There will be a free morning tea and lunch provided.

These short courses are tasters of longer courses run by ANI in various places throughout the district. These workshops are run in conjunction with NSW Carers Australia and The Ascent Group, and are part of the Federal Government’s drought funding.

For more information about the workshops please ring 0407 005 100 or email lucyf@acsdarm.org.au. 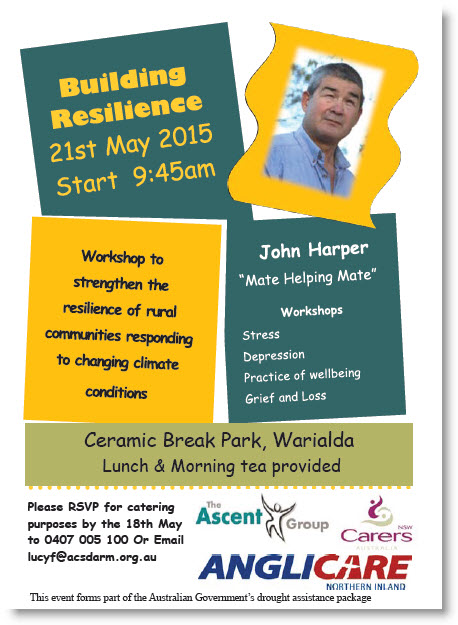