A total of 20 NSW SES volunteers gathered in Bingara recently for the first of what is hoped to be an annual Flood Boat Weekend. The aim of the workshop was to upskill in Flood Rescue techniques and to also learn from more experienced flood rescue operators. Six Flood boats were used for the weekend which was held on the waters of Copeton Dam and also on the Gwydir River at Bingara. 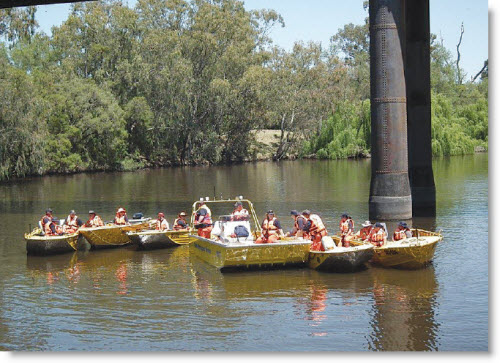 NSW SES chose a beautiful part of the region to learn new skills on the weekend.

Gwydir Shire Local Controller Peter O’Brien said “the weekend was about ensuring our volunteers are ready for any emergency that may arise”.

“Workshops like this are so important” Mr O’Brien said. “They give our NSW SES members the opportunity to learn new skills while also ensuring they are at the right level to be carrying out flood rescue operations” he said.

Region Learning and Development Officer Wes Macpherson said “it was great to see so many volunteers participating in the workshop.” “Our NSW SES volunteers already give so much time to their communities, its just great to see them all here, smiling and ready for a challenge” he said.

With help from highly trained SwiftWater Technicians, members were able to simulate a real life rescue of a person trapped in flood water. This gave the volunteers the ability to use skills they had learnt over the weekend, and put them into practice.

As the Lead agency for Emergency Flood Response, the NSW SES has a nationally recognised training program that gives members the skills to effectively save lives in times of flooding disasters.

The 20 volunteers from the North West Region cam from various Units including Warialda, Bingara, Inverell, Moree, Glen Innes and NWRHQ.

If you would like more information or on joining the NSW SES, call your local NSW SES Unit on 132 500, the Volunteer Information Line on 1800 201 000 or pop into your local Unit.

If you require emergency assistance in Floods and Storms, call the NSW SES on 132 500.

“There is a place for everyone in the NSW SES.”