Nurse Owen cleans up at Awards

Former Bingara boy Owen Bilsborough has successfully completed his Diploma of Nursing, and not only received his qualification this week, but also took out both the Academic Excellence Award in nursing studies, as well as the Southern Queensland Institute of TAFE’s (SQIT) highest award, the prestigious “Friends of College and Students” (FOCAS) the Bob Walker Memorial Trophy for outstanding achievement across all SQIT faculties. 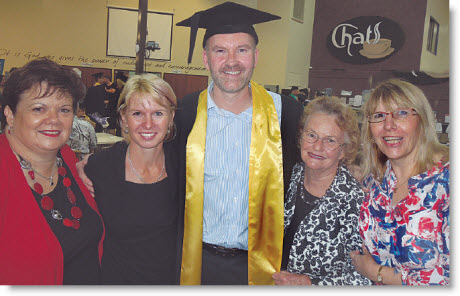 This is the first time a nursing student has received this recognition for efforts in their field of study. A long term dream of Owen’s was to complete a qualification in nursing and make a difference to people’s lives. His dream was realised after two significant events in his life, firstly, his retirement from his long-held managerial position in the travel industry and secondly, his father’s experience as a long term patient at the Bingara Hospital.

These events not only gave him the time to study and take a new direction in his life but also highlighted the fact that he could make a valuable contribution to the field of nursing.

Up until the completion of this diploma, Owen has worked in aged care for 12 months. He enjoyed it immensely, receiving high praise and accolades for his efforts. This new qualification and awards will no doubt provide him with more clinical responsibility and vocational opportunities.

Always an advocate for the rights of the patient, Owen is looking forward to making each day the best that it can be for those under his care and intends to continue his studies into Advanced Practice. Owen graduated on Saturday, March 2, 2013 and was delighted that he could share his day with his mother, Lucy and his close friends from the world of nursing, Angela Pankhurst, Sharon Price and Jenny Amor.