Whether it’s as the Charles Dicken’s novel ‘Oliver Twist’ or the famous Lionel Bart musical “Oliver!” or its award-winning movie sequel, the story of the orphan boy in the slums of early Victorian London, lives on in our memories. 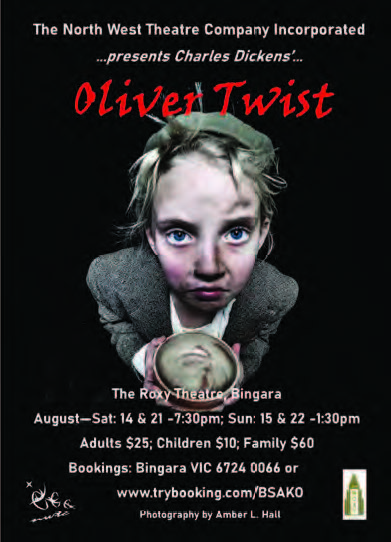 The North West Theatre Company decided to take on a production of ‘Oliver Twist’ as a play adaptation in order to engage our senior and junior players into a fun play.

Director Rick Hutton wrote the adaptation with ideas taken from both the novel and the musical. Some of the orchestrations from the musical are used to change the scenes on the multi-layered stage and the cast remains ‘on stage’ for the whole show.

Many of the players, both old and young are performing on stage for the first time. There is a lot of fun being had be all of the cast several playing multi-roles.

Newcomer, Amber Hall, is having a ball interpreting Mr Bumble the Beadle of the Parish Workhouse, while NWTC stalwarts Lee Loudon and Tanya Heaton enjoy some cross-dressing in both male and female roles. And the kids are enjoying being in the roles of the Workhouse Children and as the members of Fagin’s gang of Pickpockets.

Lachie McIntosh plays the Artful Dodger, and Ruby Miller is simply adorable in the title role of Oliver Twist. Add to these Bill McIntosh as Fagin, his daughter Bella as Nancy, and Kai Stamer as the brutish Bill Sykes and you have just a few of the wonderful cast.

This is live theatre at its community best with fun and frolics and many surprises.

Bookings can be made through the Bingara Visitor Information Centre and you can use your Government Recreation Vouchers to purchase tickets.