Last Sunday, June 10, marked a huge milestone on two counts. It was 180 years, to the day, since the infamous Myall Creek massacre which took place on the property, and it was 20 years since the first meeting to plan for a permanent memorial to those who had been killed.

With the common goal of reconciliation, four speakers association with the project gave a very different perspective to the process. Elder, Lyall Munro, who was one of the instigators of the Myall Creek Memorial, attended with members of his family. He welcomed the crowd of about 1000 people to the service at the Memorial Rock, and praised the committee who has worked hard for years to achieve a permanent memorial to a very dark chapter in Australia’s history. “I have never come across a committee like Myall Creek,” he said. “You are the real people. It is not about racism, it is about history; real people, real history, Australia is multicultural” adding “people will get a shock when they see about Myall Creek on television.”

Mr. Munro also congratulated Ted Stubbins, who worked on the committee since its inception, on being made a Life Member of the committee. 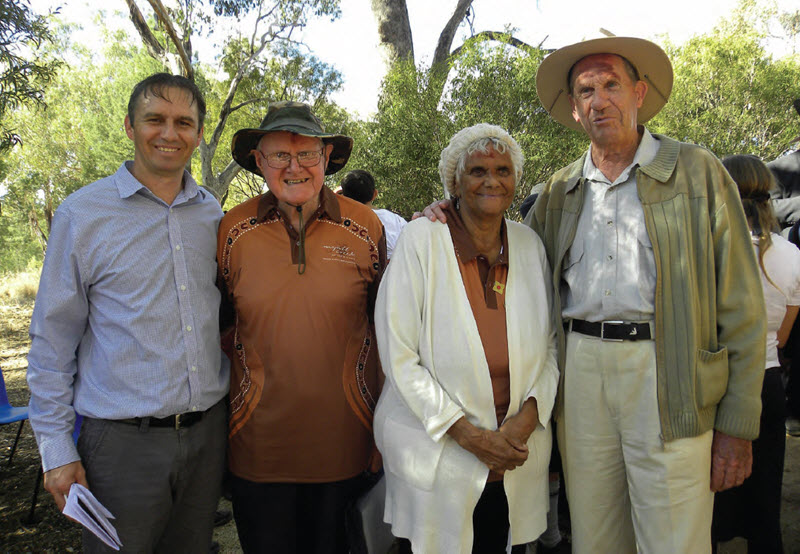 In previous years, the commemoration has had one guest speaker, but this year, the committee opted to have four with a long association with the Memorial. The first, Sue Blacklock, has been involved since Day One, and made history at the first commemoration ceremony when she and Beulah Adams, the great niece of a perpetrators, embraced in a powerful show of reconciliation.

Today, we remember those who were massacred,” Mrs. Blacklock said. She invited those attending to come to Myall Creek, as she has done many times, and sit quietly. “You can sit, and as the breeze blows, you can hear the voice of our ancestors. The wind tells the stories, the birds sing their songs. “You just have to listen to the sounds around the place,” she said. She said that when she first came to Myall Creek, it was with a ‘hurting heart’, but now, she knows that the spirits of those who were brutally murdered are soaring high. Mrs. Blacklock also noted that her brother, Lyall Munro’s family were, for the first time, all in attendance.

The great great grandson of John Blake, one of the four initially charged but were let off, Des Blake, has also been involved with the project all along. In 1997, he explained, he spoke to a school class at Wagga Wagga about the massacre. “Later, one of the teachers posted me an article about the meeting. I just got on the phone and got hold of Paulette Smith (Hayes), and asked ‘would you like someone from the other side?’ “She went to Lyall and Sue, I attended the opening in 2000, and have been here every June,” he said.

Mr. Blake said that when he found out about his infamous ancestor, two of his siblings “did not want to know”. The other two, though, showed an interest. “One is a priest, and to show his support, every year, he tells the whole congregation. My sister listened to an interview with author Peter Stewart, and rang the radio station to identify,” he said. Mr. Blake has brought his eight grandchildren to Myall Creek, one by one. All eight, he says, can’t wait to get back.

“Education in schools about what happened is important, if we don’t talk about it, we have something to worry about.”

Former co-chair of the Myall Creek Memorial Committee, Rev. John Brown spoke about the history of the project. “It is 20 years ago that many of us met in the Myall Creek Hall, and talked about our shared history, and the necessary steps we needed to take. “We built a small cairn with stones that people had brought from all over NSW, and further afield. Mr. Brown noted that other massacres had taken place around the country, and that he and his cohorts were not the first to commemorate the events. “Ted Stubbins was one of those few who commemorated in the valley below,” he said.

He spoke about the construction of the walkway, how he and Paulette Hayes found the rock near Tingha and had it brought to the site, courtesy of Transfield, and plans for the proposed educational centre. He spoke of building respect and justice. “I look forward to the day when your culture is treated with the same respect as mine, when our prisons have proportionately no more aboriginal people than white people, and our indigenous young people have the same opportunities as nonindigenous.

“I hope that local people will have fund-raising, and political representatives and landholders support our efforts. “May what we do here today contribute to these goals.”

Keith Munro, grandson of inaugural co-chair, Lyall Munro, explained that as a younger generation of a survivor, and as a parent, it is important to speak in his Aboriginal language, so he began his speech in the Gamilaraay language. “It is important for all Aboriginal people to keep rooted to country,” he said.

He acknowledged the work Ted Stubbins has done, and extended thanks to “all who have kept the story alive.” “The legacy would have died if it were not for people in local towns acknowledging, and other Gomeroi people who have travelled here.”

Mr. Munro said that as a young child, he was not aware of some parts of history. “They hid it from us, but we were inquisitive,” he said. “We are an ancient culture, I don’t know why it is not celebrated. “My grandfather, Aunt Sue, Lizzy never taught us to hate, they taught us to work and break down barriers, and have a sense of pride.

“To come and meet descendants of the perpetrators, it is not a blame on their shoulders; the work they started is important and thinking about what happened 180 years ago, and what my family were doing, and put into perspective of the two boys who survived. “It is something which deserves a bigger audience, not just an Australian story, but a story about what you can achieve with forgiveness.”

Mr. Munro said a tree can’t grow without roots, and good people who see bad things happen and do good things. “There is a role to play here. Unless we as a nation can accept our shared history, along with not-so good history, we will not grow. He concluded by praising the schools which had attended, some coming from as far as Canberra and the Gold Coast, the students and the teachers who gave up their long weekend to attend.