Orange was indeed everywhere in Bingara last week, culminating in one of the best Orange Festivals the town has seen for several years on Saturday. 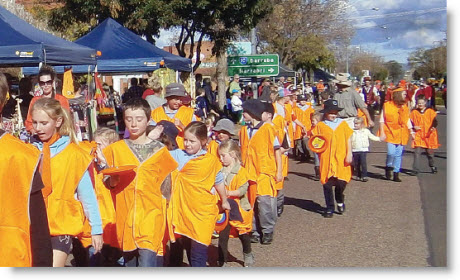 Councillors and the General Manager of Willoughby Council were guests of Gwydir Shire at the Festival.

Six young people from Willoughby were also entertained by a corresponding group from Bingara, who will attend the Willoughby Spring Fair later in the year.

On Sunday, the group visited the property of Peter and Brenda Pankhurst for a taste of farm life.

Local businesses got into the swing of the festival, with decorated shop windows. The Advocate spoke to several business owners on Saturday, and all reported good sales.
After a dismal parade last year, the crowd was this year delighted to see a much bigger and lively parade, involving a number of community organisations. Even Council’s senior staff, Richard Jane and Andrew Cooper took part, ‘showing off’ Council’s new machinery.

After a slow start in bookings, the long lunch proved a success, with over 60 people taking part.

Overall, the festival has received a ‘thumbs up’ from the community, the only perceived negatives being “not enough street food”, and “not enough entertainment for older children”.