Australia- our sunburnt country…. a land of droughts and flooding rains. Australia Day in Bingara sure spoke true to the words of Dorothy Mackeller. What started out as a typical summer’s day soon turned into sweltering humid heat and ended with the welcome relief of rain, thunder and lightning, but oh so beautiful rain. What more could we ask for on our national day of celebration? 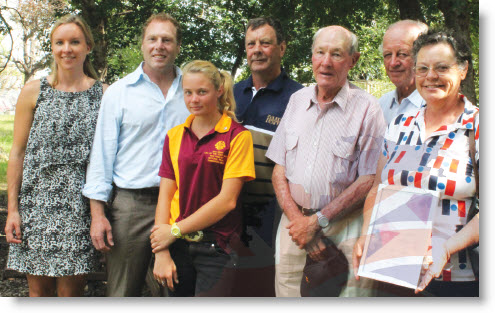 Bingara celebrated the official side of Australia day with a ceremony at the Bingara Historical Museum where local individuals and committees were recognised for their continued efforts and contribution over the years in the local community. Australia Day Ambassador, Jeremy Rolleston attended the event with his wife Satu and extended family.

“It’s a pleasure and an honour to be here in beautiful Bingara and to be your Australia Day ambassador,” Jeremy said.

“Today is the day when we come together as a nation and celebrate Australia and being Australian. And I am indeed a proud Australian on this special day.”

Jeremy addressed the crowd with a heartfelt and meaningful address where he spoke of what it meant to him to be an Australian. Throwing in a bit of humour Jeremy spoke of our true blue Aussie attributes including meat pies, backyard cricket, violet crumbles and the list goes on. In getting to the heart of it Jeremy spoke of the beauty of Australia and the freedom, privileges and opportunities that comes with being an Australian.

“We’re all Australians and that is inclusive, multicultural Australia – a country where new Australians can keep their own special culture but assimilate, and fall in love with this land, our way of life, and our people.

“The question of what it means to be Australian can never really be shaped as it is always changing, because what we are as a nation depends on who we are as people.

“Understanding and appreciation should make us fall in love with this great country even more. And that love of Australia – that is what I think it means to be Australian.”

“John’s involvement has included various executive positions, including that of President or advisor, development, instruction and coaching roles within a number of local community organisations.

“He has been a valuable asset to the Bingara Minor League as a past coach, former President of the Apex Club, keen support and broadcaster of Bingara Senior League, Bingara Show Society and for the Bingara Pony Club – a long list – including – President, instructor, advisor, camp commandant, broadcaster and life member.

“But, above all – John has excelled for 41 years by carrying out a task which they obviously have great pride in. “This has been as brigade member, Deputy Captain and Captain in his role as a Retained Firefighter of the NSW Fire and Rescue Service at Station 225. Congratulations John.”

Following in the footsteps of her Uncles Garry, Glenn and Guy, who all won Citizen of the Year award in past years, was Crystal Cooper who was awarded Young Citizen of the year.

“The award for Young Citizen of the Year is to be presented to a young person who has been involved in a number of community organisations,” Catherine announced “At just 16 years of age Crystal has achieved some remarkable highlights.”

Catherine went onto list Crystals many milestones including being involved in many local community events and organisations including Bingara Pony Club, Leos and Lion’s Club. Crystal was also recognised for winning Regional Youth of the year, Regional Leo of the Year and the NSW Leo of the Year as well as representing Bingara Leos at recent State Lions Conventions.

“Crystal has impressed the International Lions members with her dedication to Bingara, the development of Youth Services and activities in Bingara plus country and regional Australia.”

The Event of the year went to the Bingara Jockey Club for the 2014 Bingara Races.

“The award for Event of the Year is to be presented to an event which began over 60 years ago in 1953 and 2014 was one of the biggest if not the biggest over the last 20 years of that 61 year period,” said Catherine.

“Glamour reigned supreme with the masses donning their finest for the family-friendly day out.

“The event was well-supported with close to 1000 people attending, it was great to see so many people there, and they came from Interstate which included Roma in Queensland as well as from Muswellbrook in the Hunter Valley plus Inverell and Barraba in the New England North West region.”

The ceremony concluded with singing of the National Anthem led by Helen and Tony Cornish who also entertained throughout the morning.