Former Bingara girl, soprano Lexi Hutton, played to a packed Roxy Theatre on Saturday afternoon, when she and Pianist Thomas Williams, originally from Moree, performed at the Back from Berlin Opera Lounge and High Tea. 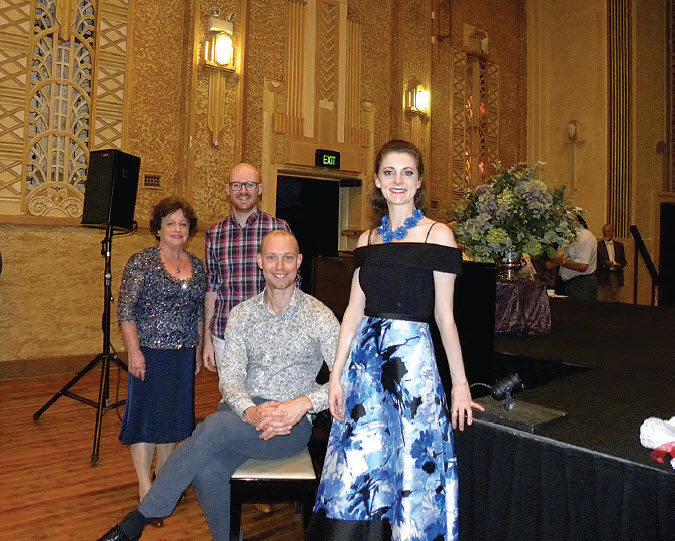 After five years away, Lexi has spent the past few weeks in Australia visiting family and friends and attending the wedding of a close friend.

The audience was treated to a variety of pieces from operas Lexi has appeared in.

During a series of on-stage chats with opera singer Peta Blyth, Lexi and Thomas spoke about how they grew up only 108 kilometres apart but did not meet until they were both living and working in Berlin.

Lexi also explained how in opera, one’s body is the instrument. She spoke about how different opera singing is to, for instance, pop or jazz, which only uses the throat, and a microphone. Opera, she explained, uses all the body to create the sound.

Ritchie Hair, composer and friend of Thomas, also attended the opera lounge. Thomas played a piece of music written by Ritchie, entitled “It’s always ourselves we find in the sea”. Originally from Newcastle, Ritchie is now based in Moree.

Thomas completed his tertiary music training in Melbourne, studying at both the Conservatorium of Music and the Australian National Academy of Music.  While at the academy, Thomas was heavily involved in chamber and vocal work, working as a repetiteur of Victorian Opera at the University of Melbourne and privately.

He was employed by the Staatstheatrer Braunschweig from 2014 to 2016, as one of the four repetiteurs in the company, as well as playing privately around Germany.  He is now back in Melbourne, has just finished a Master of Teaching, and is looking forward to teaching and performing.

After she finished school, Lexi went on to study at the Sydney Conservatorium of Music before joining Opera Australia’s school touring company, Oz Opera.  After much local success in eisteddfodau and singing competitions, she moved to London to study at the Royal College of Music.

After success in the 2010 International Belvedere Singing Competition in Vienna, she went on to make her international operatic debut at the Deutsche Oper Berlin as Papagena in Mozart’s The Magic Flute and subsequently joined the company as a young artist in 2013. That same year she appeared as one of the Nieces in the Aldeburgh Festival’s critically acclaimed production of Benjamin Britten’s Peter Grimes, staged on Aldeburgh Beach.

Since 2015 Lexi has been a Principal Soprano at Deutsche Oper, and has performed in a number of operas around Europe.  When she returns to Berlin Lexi will make her highly anticipated role debut as Adele in Die Fledermaus at the Deutsche Oper Berlin in December and will make another major role debut in the Bel canto repertoire as Lisa in Belini’s La Sonnambula next January.