Reverend Brian Darbyshire, who has been the Anglican Vicar in Bingara for more than four years, held his last church service in the town at St John’s on Sunday, January 13. The service included four of the couple’s favourite hymns, including Amazing Grace which was sung to the bagpipes, played by guest piper, Don Mack.

At morning tea after the service, Brian and Jen were presented with an album of photographs and stories recording their time in Bingara by Parish Council member, Carole Rattray. 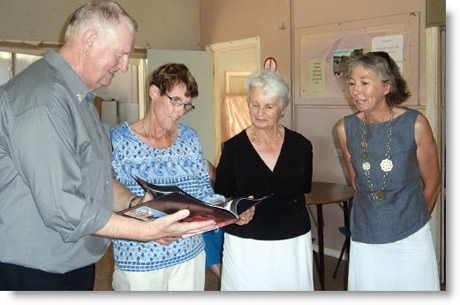 A book of photographs and stories of The Rev. Brian and Jen Darbyshire’s time in Bingara, presented by Parish Council members, Carole Rattray and Robbie Swatman.

Brian with his wife, Jen came from St Ninian’s on the Isle of Mann to take up the ministry in Bingara, commencing on September 1, 2008 following communications with Bishop Peter Brain. Brian and Jen had been considering retiring to Australia to be near their daughter and son-in-law, who live in Brisbane.

Born in Lancashire, Brian’s first parish saw him as a Curate in London. An “East ender”, Jen met Brian when they were both training with the church army (a lay society of evangelists within the Church of England) in London in 1967.

Brian told the Advocate that his first impression of Bingara was that it was a great distance from Brisbane! The couple thought it looked like a nice country town nevertheless and were determined to settle in.

“I just went about my pastoral duties…we were just us,” Brian said. “Bingara isn’t the first country parish I’ve had. You can’t hide behind being an ordained Minister, we had to be ourselves.”

“We will miss Bingara,” Brian said. “We will miss looking at that beautiful gum tree outside the Vicarage and the beautiful hills. We will miss going out to the country churches. That was totally new to us. The distances were something we had to get used to. Distance was measured in time, not kilometres. We will miss the whole community and we thank the community for accepting us. It has been a privilege to serve here and we will miss everyone very much.”

The community displayed its gratitude to the Darbyshires at a farewell function held at the Bingara RSL on Thursday, January 10. More than 70 people attended the farewell dinner, which saw representatives from the Uniting, Catholic, Presbyterian and outlying Anglican churches pay tribute to Brian and Jen. David Young, President of the RSL Sub-branch also participated, presenting Brian with a framed certificate of appreciation for Brian’s involvement with the sub-branch.

As for the future, Brian said that after 46 years of stipendiary ministry, he was looking forward to taking at least three months off to settle in to “not having to do things at certain times!”  He said he and Jen “want to try to play some golf and spend some time getting to know our new community.”

Bingara’s new Vicar, Reverend Swan and his wife Elizabeth and four children have arrived in town.