Passion for Flame Jewellery on show at Gwydir Art Show

Passion for Flame Jewellery was established by Lisa Crispin in 2005 after demands for her to display her work to international customers.

It was only recently that Lisa realized that per passion for working with flame and metal must be in her genes. Her great-grandfather, Walter Daly, was the local blacksmith in Southgate at the beginning of the 20th century.

These days Lisa not only works with beads, but loves to spend her time making intricate chain maille pieces from both traditional and non-traditional weaves.

She is proficient in over 20 different techniques from very simple to amazingly complex designs. Her work has received numerous awards and has garnered the praise of some national and international artisans.

Lisa also prides herself for her work with wire wrapping. She uses both faceted stones and cabochons in her work, some of which she has cut and polished herself from rough stones. 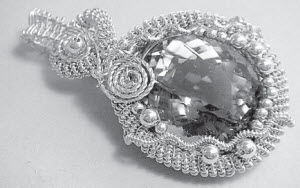 Her most prized piece would be her “Dragon’s Blood” pendant, featuring a Ruby Zoisite cabochon that she fashioned from a rough stone by herself then set into an intricate maze of wire, much of which was as small as 0.3mm in diameter – not much thicker than a human hair.

This piece was bought by United States artist Tony Dortch and will shortly feature in a fashion extravaganza and photo shoot in Boston, Philadelphia. The piece will then be depicted in an artwork by Mr. Dortch.

Lisa is looking forward to again participating in this year’s Gwydir Art Show in Bingara. Her son Scot is a teacher at Bingara Central School and over the last few years, Lisa has grown immensely fond of the area and its residents.