The basic idea is that as members of the military, you are subjected to being moved around, we call it Posted, to anywhere in the country and or overseas on deployment. Areas that have seen Australian forces deployed include, but are not limited to, Vietnam, Timor, Afghanistan, Solomon Islands and Iraq. Due to the constant moving around, it is hard for service personnel to settle in an area and establish long term contacts and so being part of an organisation where you have something in common with others, makes integration into communities a little easier.

The Barwon Chapter was formed due to there not being anything north of Newcastle for service and ex-service people to join. The Barwon Chapters ‘Area of Operation’, military term for where we reside/ride, swings from Coffs Harbour on the coast, down under Tamworth and across to Walgett in the west, and up to the border with Queensland.

Being a large area, we looked for a place that was central for us all to ride to and meet up, and as a couple of our members have been regularly travelling to Bingara to attend Council related business, we decided on Bingara as a meeting place. We went the next step to looking for a building that we could utilise to establish a ‘home’ for the Chapter, and the Council came to our assistance. The Scout Hall had become run down and Council and our Chapter agreed that through working bees we would repair boards, paint, replace guttering, remove an old tank, tidy the area, and generally spruce up the Hall in lieu of rent for the first year. The current users of the Hall will continue to have access. 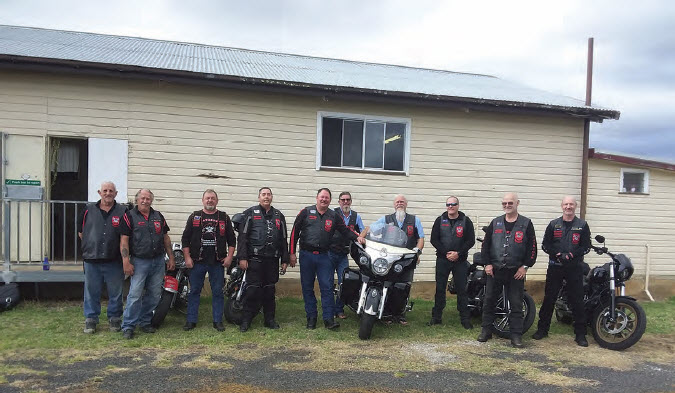 Members of the Patriots Australia Military Motorcycle Club outside the Bingara Scout Hall at Gwydir Oval.

We have been travelling to Bingara and working on fixing up the hall that is now starting to look like and feel like a clubhouse. Our aim as a Chapter is to have our presence felt in Bingara as a part of the wider community. We don’t live there but we feel accepted here as part of the town’s community. We intend on putting back into the community through areas such as tourism. We have a large network in the motorcycling world and if we can advertise the town as a ‘bike friendly’ tourism venue, there will be continued benefits for the economy.

We are getting involved with the local RSL Sub Branch. Anyone that has a military background and rides a bike is most welcome to come along, have a look at what we do, and if inclined – to join us. We do have rules and we do follow the ethos of the Australian Defence Forces in the way we conduct ourselves. We plan on having a grand opening sometime before the end of the year once we have finished doing up the clubhouse and all will be welcome to join us and become part of our family.