In a matter of weeks, Bingara’s 1400 residents will see the closure of a bank that has long played an important role in many of their lives. It’s an all-too-familiar story that’s played out in hundreds of small towns across Australia.

The encouraging news is that this time the story may have a happy ending. While NAB is exiting, Regional Australia Bank is very keen to stay put and have developed a direct response to the calls of the Bingara community. But it’s going to take some collaboration between the bank and Bingara residents according to the Regional Australia Bank CEO Kevin Dupé. 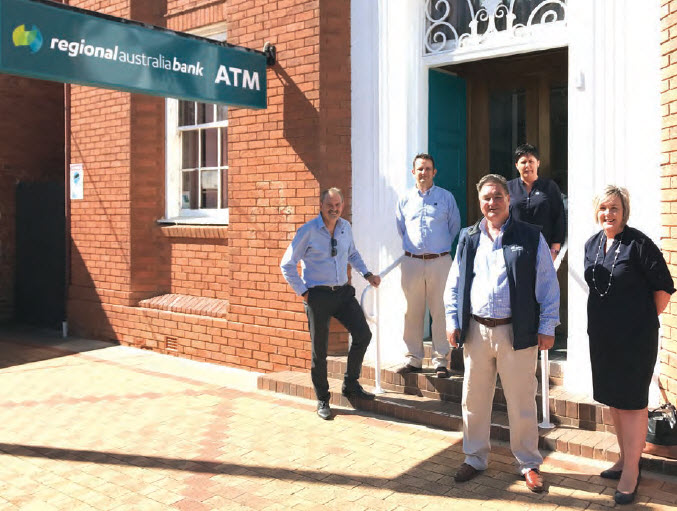 In a meeting held with the Gwydir Shire Council and Bingara Business owners last Thursday, Snr Staff from Regional Australia Bank, which included Mr Dupé himself, outlined what was needed in order for the Bingara Branch to remain sustainable in a time of declining traditional over-the-counter branch services.

“It’s going to take collaboration, and that’s why we are here” said Mr Dupé. “We are a customer owned bank who operates in the best interest of customers, not shareholders. And if the people of Bingara want these services to remain in their town for longer, they need to become customers and join a movement to own their own bank. Because at Regional Australia Bank, the customer is the shareholder. You literally do own your own bank. Being a shareholder means you have a say, and we listen. We turn up to meetings like this and if we can, we try our very best to help.”

But Mr Dupé was quick to clarify that it was less about Regional Australia Bank helping Bingara, and more about Bingara residents helping themselves. “Regional Australia Bank is a people powered business and it’s an extremely successful operation in terms of how it performs and the value it provides its customers.”

“Currently we operate the Bingara Branch for two days per week. It’s clear from our dealings with the Bingara business community that they would value a third day of trading, opening on Fridays.”

When asked what was required of Bingara residents, Mr Dupé responded with a challenge: “We believe we’d need about 25 people to bring their home loan across from other financial institutions. Bingara is a great little community with a vision for the future. It’s passionate, resourceful and empowered. I am certain that it’s these qualities that will see Bingara residents easily hit that milestone.”

In the meetings, Regional Australia Bank agreed to open for 3 hours on a Friday afternoons for the next three months commencing Friday the 20th of April. If Bingara residents respond and seek to bring their lending over, the bank will continue to trade for the third day and remain open on Friday afternoons. If the Bingara residents do not support the effort, trading hours will continue per current arrangements.

“The reality is that we are pretty sure everyone will win if people power prevails. It’s very likely that the residents of Bingara will save money and get to have their banks branch service in the town for a lot longer,” said Mr Dupé.

Bill Miller, Chief Customer Relationship Officer at the Bank reinforced that the Staff at the Bingara branch will make as easy as possible by doing the heavy lifting for new customers who make the switch.

“We’ll handle the changeover of your direct debits and remove as much complexity as possible out of the process. Further, any Bingara resident who brings in a statement from their current bank in the next 3 months for a quote, be it from NAB or otherwise, will have their Regional Australia Bank loan fees waived (excluding external government and agency charges). In addition, we have a number of community groups and clubs in the town which we provide support with annual donations via our Community Partnership Program. If these organisations refer people who are willing to switch their home loan to us, these clubs will receive $250 for each referral that proceeds to application. We’ll even keep a running tally on our website for the Bingara residents so that they can see how they are tracking against the home lending target.”

Gwydir Shire Deputy Mayor Catherine Egan was the first to accept the challenge, saying that she will definitely be getting a banking quote from Regional Australia Bank if it meant the opportunity to extend the availability of these services for the town. “We are grateful for the community engagement from Regional Australia Bank and the incentive to switch is definitely there. I am sure we can collaborate and I am hoping they can provide that value back to me personally!” 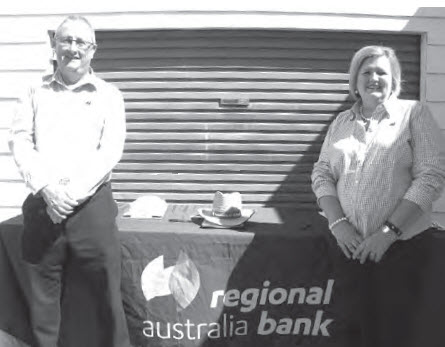 Regional Australia Bank Business Development Managers Jon Izzard and Brenda Moon were in Bingara on Tuesday operating a ‘pop-up’ stall in Maitland Street, giving the community information about the services offered by the bank.

Regional Australia Bank has been operating for 50 years and servicing the Bingara community for over 35 years. It is a major sponsor of the town’s Orange Festival and previously North West Film Festival. Regional Australia Bank’s Community Partnership Program donates thousands of dollars annually to local Bingara community organisations and this same Program is set to deliver over 1 million dollars back to grass roots community groups across North and North West NSW in 2018.

The Bingara branch is currently open from 10am-3pm on Tuesday and Thursday and will now be open additional hours on Friday from 12pm – 3pm for a 3 month period. Regional Australia Bank lending specialists are also available by appointment. It is located at 39 Maitland Street.

A ‘pop up shop’ is also in operation. This is a way for Regional Australia Bank to be visible and available to the community during this period when they may be looking to switch banks. The pop up stand is in addition to normal branch hours (Tuesdays and Thursday 10am – 3pm, and Friday from 12pm-3pm from this week).